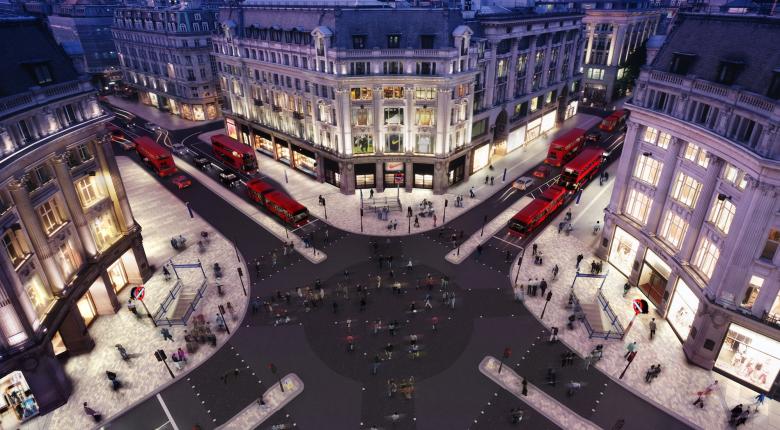 Oxford Circus is one of the most congested spaces in the country.  It is used by over 43,000 people and 2,000 vehicles every hour, and forms part of 23 London bus routes.  The stairways to the tube station at the corners of the circus are used by 230,000 people a day.

Atkins was appointed by the Crown Estate to improve pedestrian movement and the quality of the public realm at Oxford Circus as part of their ongoing investment in their Regent Street Estate. Our solution involved the introduction of the UK’s first large scale, diagonal crossing and a radical increase in the amount of footway space. We enabled all existing barriers and street clutter to be ripped out and remodelled in order to give pedestrians the freedom to move around quickly both straight ahead and diagonally – across both Regent Street and Oxford Street.  The new diagonal crossings opening to widespread praise, and the scheme very quickly realised time cost savings that are calculated to be higher than the cost of works – effectively paying for itself in 6 months.

This approach to street design has further underpinned our ongoing work with the Crown Estate, looking at a variety of public realm enhancement projects in the area, including most recently the completion of the Piccadilly Two-Way restoration scheme on Regent Street St. James, Waterloo Place and Haymarket – where we have massively increased footway space, and through rationalisation of clutter have created a much safer street environment for all users.