Since its publication more than 25 years ago, this book continues to impress; it looks in detail at what makes great streets around the world. Unlike so many books about streets which rely on photographs, its value lies in the scaled drawings - figure-grounds, sections and plans - of famous streets and spaces: the Ramblas, the Champs-Elysees, Stroget in Copenhagen, Fifth Avenue, Piccadilly Circus, Regent Street, Edinburgh’s Princes Street, and even Venice’s Grand Canal, to name just a few.

The ability to be able to make precise scale comparisons of spaces remembered, probably inaccurately, is what makes the difference between a designer’s vision and reality. Detailed street-level sketches throughout the book add the character that sections and plans can’t represent. Great Streets grew out of Jacobs’ teaching at the University of California in Berkeley in the 1980s, when a studio project involved looking at how to improve Van Ness Avenue in San Francisco, and learn from other places to inform its potential. He soon discovered how hard it was to find accurate plans of well-known streets, and that ‘we couldn’t put dimensions to our memories’.

This scenario reflects my own early experience in practice. A project in which I was involved in problem-solving capacity required bridging the gap between the project’s architects and the local authority’s planners. The architect’s vision for the main space in this waterfront development was for it to resemble Piazza San Marco in Venice; this is a wonderful place to be in for its sense of enclosure, grandeur, formality and informality, passageways, roofscape, elevations, floorscape, variety and uniformity, and so on. But the proposals on the table did not seem very similar to it. By accurately comparing the two spaces, using the scale drawing of Piazza San Marco from this book, it was possible to show the designers that their spaces would be very different in scale, and would not have the same proportions or properties. In the end, the scheme was built with some changes, and a subsequent visit reminded me of the other qualities that the Venetian example had and this one did not – the quality of the buildings and the richness of the design overall, no doubt created by many hands.

So Great Streets proved its worth to me soon after it arrived in the office, and each time I go back to it, I find more depth. It encourages us to reflect on our experiences of spaces, as well as to seek out new places which can teach us something.

Part One, Great Streets, looks at types of streets, such as Still Great Medieval Streets, In the Grand Manner, Once Great Streets, Trees Alone, and more. This section is very interesting as it includes a social history of each example, and a description about how it is used and feels, and reminiscences or recollections of Jacobs’ past visits.

Part Two, Streets that Teach is an even more systematic record of key streets’ properties, which Jacobs has grouped as he thinks that designers and policy makers might use them, grouping ancient streets or boulevards together. These range from Herculaneum to Unter den Linden in Berlin, via Main Street in Disneyland California. The supporting bullet points set out the typical characteristics, and as the streets become more complex or multifunctional through the chapter, these notes become more detailed, identifying typical shop widths, busy times of the day, views from the public space, and most importantly, key dimensions. The Appendix also includes pedestrian volumes, which allow comparisons with contemporary data.

Part Three, Street and City Patterns is a fascinating collection of scaled figure-ground plans, which further increases the range of places referenced, and shows the wider context of some of the earlier examples. This section features streets beyond Europe such as classic American streets, and a wide range of Asian, Latin American and Australian ones - e.g. Beijing, Brasilia, Chandigarh, Sydney and Ahmedabad. Jacobs’ analysis goes further, looking at the intersections and blocks per square mile for selected cities (and in some cases how that has changed over time), so we learn that Los Angeles has 47 blocks per square mile, while Rome is far more interconnected and has 504 intersections per square mile. Some of the data is no doubt useful to enlightened traffic engineers seeking to demonstrate the sustainability, walkability and perhaps road safety attributes of places, but overall it adds to the book’s purpose of helping ‘people to have better understandings of their communities’ and how people interact.

Part Four, Making Great Streets looks at the designable qualities that can be transferred to other contexts. Here the sheer weight of Jacobs’ analysis works against itself; his principles are useful but not pithy enough to compete with some of Jan Gehl’s key ideas or Responsive Environment’s qualities such as permeability and robustness, to become useful rules of thumb to which busy designers can turn.

Concluding his magnum opus, Jacobs advocates that ‘Great streets do not just happen… the hands of decision makers, sometimes of specific designers, are visible… In cases where the initial layout and properties of the street evolved, such as Stroget or the Ramblas, there is likely to have been a major concerted design effort at some point to make the street what it has become’. He is clear that in looking at the public realm, not only should we call upon accurate plans and sections to have a realistic understanding of places, but also not overlook the life on those streets and how they have changed over time. At a time when major housing developments are being designed relying on soulless road networks, or cities are bravely reviewing the space given over to traffic in face of rising air pollution, public transport routes and more active travel, the places in this book should be a great inspiration.

Great Streets ought to be on the reading list of all urban design, planning, engineering, transport, architecture and landscape architecture courses, as Jacobs is clear that ‘the best streets, by and large, get designed and then are cared for, continuously’. No one profession can stand back and regard their work as done. 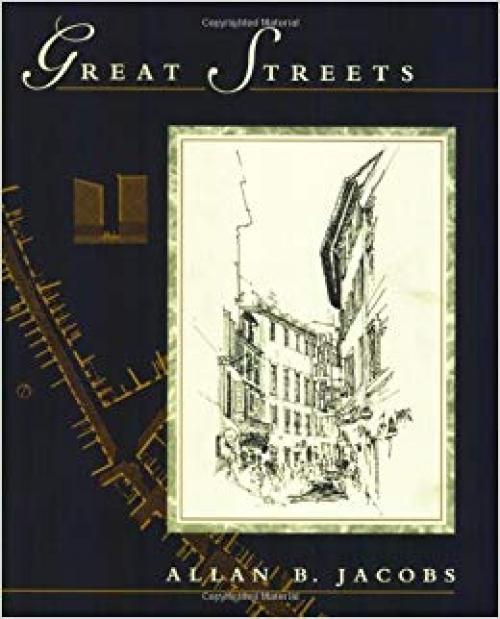