The main topic of this issue of URBAN DESIGN examines ‘the spaces in between’, led by Quentin Stevens. This idea refers to the many urban spaces that remain ‘in-between’ the boundaries, definitions, rules and management regimes that urban designers typically seek to produce and enforce. The authors that he has drawn together emphasise the virtues of messy ‘betweenness’, illustrating how it can stimulate and sustain valued forms of social behaviour and identity. The contributors - sociologists, human geographers, environmental psychologists, artists and architects - combine observations of places in the UK, US and Europe. We recognise these places as what makes out towns and cities diverse, multi-functional and personal, and add the unexpected richness that we enjoy.

Professor Karen A. Franck considers pavements or sidewalks in the American cities of New York and Los Angeles, and the role that they play in supporting community life. David Bell describes the state of the ‘outside’ in British city centres, and the confusing messages that recent policy changes have attached to it. Justin Spinney argues for cycling to be seen as between the traffic and pedestrians, with very different needs and motivations. Professor Sophie Watson describes two situations where public-private spaces and uses have become highly cherished places within London, and Can Altay explores creative popular reinterpretations of urban space in Ankara and London.

This issue also sees the notable case study of Newhall Harlow reviewed, as its second phase gets underway. Judith Ryser reports from Aviles in northern Spain on the city’s plans for cultural renewal, and the sub-regional authority - the Principality of Asturias - has generously sponsored this issue. Following the theme of the cultural cities in UD 106, John Montgomery presents the important ingredients for cultural quarters, but often missing from planned areas. Mauricio Hernandez-Bonilla describes the remarkable self-build urban design underway in Mexican low income neighbourhoods, to create genuine public places. Ecologist Barbara Goncalves provides a useful summary of the benefits of using green roofs, how they work and sources of further information. As the third comparative ESRC seminar report on urban design and the British urban renaissance, Steve Tiesdell gives an illustrated pr�cis of discussions on Liverpool, Belfast, Edinburgh and Glasgow.

There are also reports of UDG talks, the UDG’s annual AGM and financial statement. The Urban Design Interview hears from Charles Brocklehurst, Head of Property Services at Wycombe District Council, local developer and long-time fan of the UDG’s study tours. 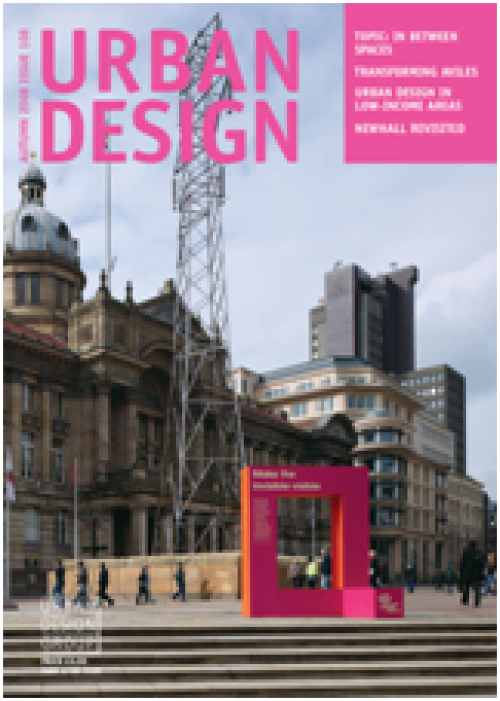