Climax City is an exquisite example of twodimensional figure-ground maps analysis supported by strong debates on political quarrels. Beautifully illustrated, this publication exposes the x-rays of cities to help readers to construct their own analogical understanding of urban growth.

Rudlin and Hemani begin by painting a concise but thorough picture of how urbanists arrived at the current theory of the city as a dynamic urban system. They promote the fascinating idea of settlements being ‘collectivist individuals’ with a mind of their own, and with larger stronger and more powerful identities than the addition of all of their component cells.

Surprisingly, the book is packed with anecdotal nuances of urban practice that make the reading interesting and highly entertaining. The story of a settlement that strived to be designated a Gay Village, and the controversial statement that frames masterplanning as a gender-laden term, are examples of the confidence and audacity of the authors. This literature paints a clear image of the hurdles that professionals face in our times.

Exploring patterns of growth through graphic and qualitative analyses, the authors take the readers on a trip around the world to discover how organic, spontaneous, planned and redesigned cities have shrunk and expanded over time. Reflecting on what has worked well and what has not, the reader can begin to construct a mental map of the world and how humans transformed it over time.

It soon becomes very clear that the fate of a city is not in the hands of the urban planner alone, and that whatever the approach, unexpected long-term consequences can always emerge. Inevitably, the role of various planning systems is challenged and questioned. Ultimately, planning is referred to as another indispensable component of the city make-up, one that influences the patterns of growth as much as, but no more than, any other variable.

Perhaps the most powerful message that can be drawn from the book is the notion that morphological analysis has a lot to say about humans and their natural capacity to organise themselves into settlements. Yet remarkably, the focus on form does not detract from other dimensions of place, which are present in the text to support the graphic enquiry.

Climax City leaves us questioning where to go next to further understand urban growth. Subtly, the authors make a tacit invitation to explore whether more advance software will ever be able to capture multiple dimensions, whilst producing such beautiful pictures. 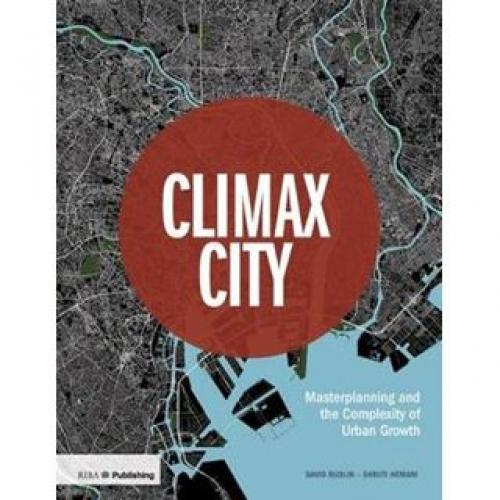