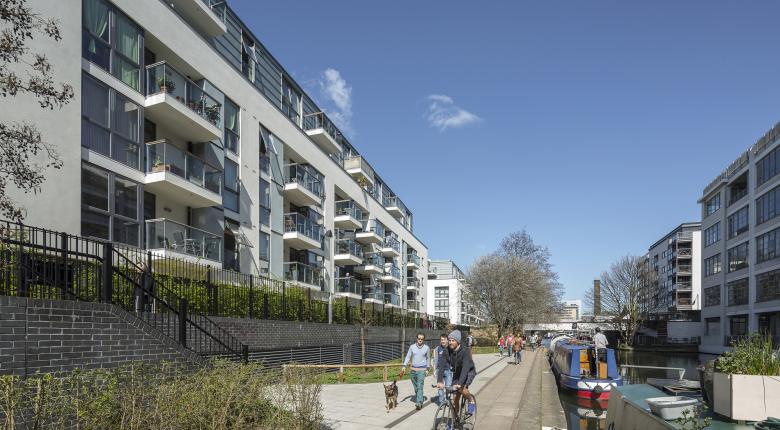 This project involves the redevelopment of the entire 1970s Packington Estate in Islington, replacing around 540 affordable homes with around 800 new mixed tenure homes, as well as shops and a community centre, a new youth centre and adventure playground.

Together with Hyde Housing we won the competition held by LB Islington to carry out the estate regeneration. The competition was hotly contested, but our ability to carry out a comprehensive consultation process with the residents revealed that the magic ingredient was accommodation for families in traditional houses with front doors on to the street and their own gardens. We acted on this – and won the residents’ ballot.

The focus of the new neighbourhood is the creation of two new connected squares laid out along the main axis of the estate, which open up onto a new canal-side walk. The reinstatement of the historic Union Square, which was partly destroyed in the laying out of the Packington Estate in the 1970s, has succeeded in reintegrating the old estate with the surrounding affluent area by recreating the pattern of Victorian streets and elegant squares common to Islington.

The new Packington Estate is a flagship scheme for affordable housing: it includes affordable canal-side apartments and contemporary family houses with their own private gardens. Affordable family houses at the edge of the estate integrate seamlessly with the surrounding high value Georgian terraces: the former estate is now a benchmark for the creation of tenure-blind housing.

The scheme has won multiple awards, including the National Housing Awards in 2013.