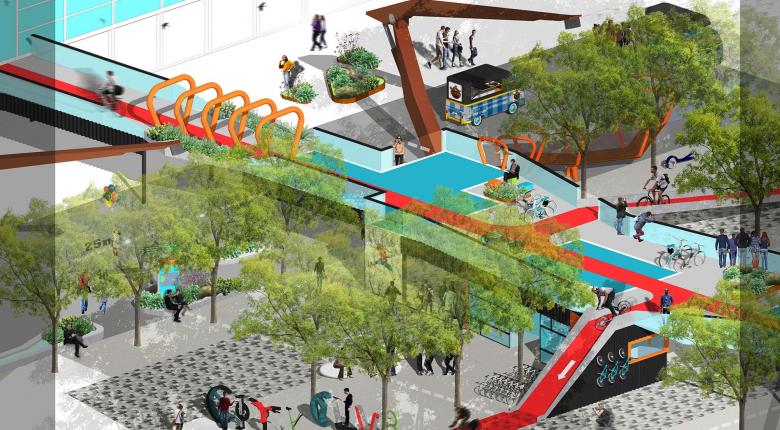 The project responds to Milton Keynes’ lack of genuine, quality public space and aims to excite MK citizens about what could happen if they took over and occupied their urban spaces.

Key to this vision is understanding what makes Milton Keynes special and through multiple site visits I picked up on the underutilised and often unnoticed porte cochère structures. These 269 unique structures are passive objects, sheltering pedestrians as they wait for cars, the dominant mode of transport, to pass. Some porte cochères even have signs saying “Pedestrians do not have priority” giving further weighting to cars. My project sought to take these background features and transform them from passive objects into playful, interactive parts of the public realm.

My early research revealed an often negative perception of the city and through talks with different characters on site, I could sense their frustrations and an underlying tribalistic mentality. As my project evolved I realised the importance of working in collaboration with local people and so I sought to use consultation as a tool to generate ideas and gain buy in. Unfortunately Co-vid 19 prevented any physical consultation but through free online tools I sent out early sketch ideas and got people to vote for their favourites. To truly get buy in from the locals I, proposed all interventions would be temporary, part of a festival of urban space that could organically evolve into a permanent public space that has the trees, redways and cochères at its heart.

I learned many new skills from the project and I particularly developed skills in photography and filmmaking as part of the analysis process. I found that by spending the extra time on site and slowing myself down to either compose a photograph or set up a timelapse I got to know the site and the people more intimately. This helped me to notice the features such as the porte cochères that I had previously overlooked.

My year group also had to think differently as the co-vid 19 pandemic started to disrupt the ways we traditionally work. For me, this entailed looking at free online tools such as google earth and google forms to send my work out as part of my collaborative process.

I enjoyed exploring many smaller design ideas rather than jumping straight into one larger masterplan. Drawing quick sketch sections helped to stay loose in the design development stage and these formed the base for sharing ideas with tutors or other people interested in the project.

The flexibility of my module allowed me to arrive at a final design outcome where I could be quite bold with the themes that I had set out through my early analysis. Particularly looking at creating a superstructure from the porte cochères and bringing the redways up the structure and into the second story of existing/future buildings surrounding the site. This was inspired by indoor cycle structures in Uterct and I found the research element very interesting. 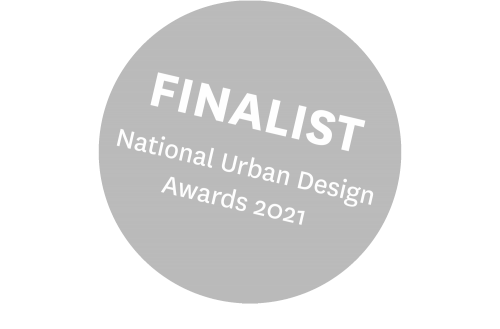 "Identifies an issue that needs to be addressed in Milton Keynes, one which gets back to the original vision for the town."