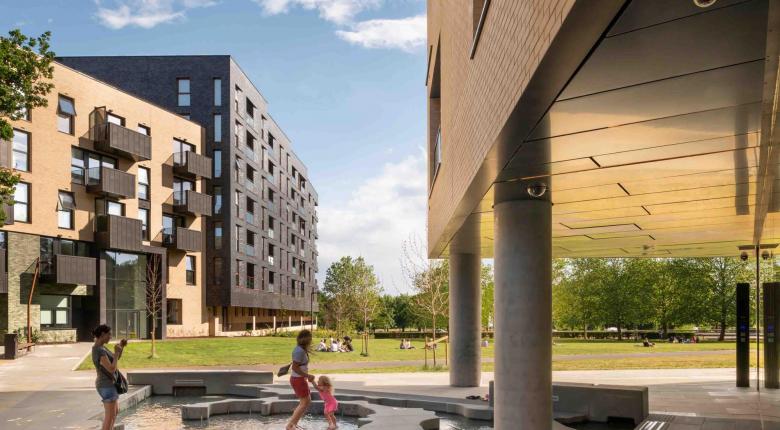 City Park West is a new residential quarter in Chelmsford with more than 600 homes alongside cafés, restaurants, landscaped public realm, sculpture, workplaces and community facilities. Its city-wide masterplanning approach connects Central Park to the south with the civic quarter and the historic core to the east. Located by the railway station on the former Anglia Ruskin University campus, it features five newbuilds, including a 14-storey tower, four new public squares and three refurbished buildings.

At street level, a network of pedestrian routes and public squares revive the intimacy and charm of old Chelmsford. This 'market town' urbanism weaves robustly-built newbuilds together with some of the town’s finest historic buildings. The newbuild brick palette references the gault brick of the Anne Knight building, the listed Quaker building brought back into use, and the red and black smoked headers of The Law Building, an art deco number also revived.

This finely-tuned setting is formed of six distinct neighbourhoods enhanced by fountains and artworks including an interactive video display and text carved into paving, benches, and steps. Together they mark the site of Burgess Spring, an important historic water source as well as celebrating contemporary and historic cultures. These spaces, open to everyone, define City Park West as much as the buildings do.

The tower is the most striking of the newbuilds, its sculpted form and facades giving an urban-scale expression that speaks to both the fine-grain of the streets and routes at its base and Kings Tower across the railway line.

1. City Park West has an on-site estate team which means residents and visitors can raise any issues with either the Estate Management Team directly, or with the concierge staff, the concierge desk being open 24/7. Residents and visitors are also able to raise issues with the Notting Hill Genesis contact centre. Residents can use the Face Book page to put forward their concerns / views to the Estate Team.

2. Contact information, including an out of hours emergency contact number, are provided to all residents including the occupiers of the commercial units for the purpose of raising any queries / repairs, or emergency maintenance related matters.

3. A comprehensive preventative and reactive maintenance plan, which includes an on-site grounds maintenance team, cleaning team, and on-site engineer, is in place to ensure the buildings and public realm are kept in a good state of repair, and condition.

4. Notting Hill Genesis works with various stakeholders such as the council, the Police, and other local stakeholders in order to ensure that City Park West is a safe and secure place for residents and visitors to enjoy.

5. Notting Hill Genesis will seek to consult residents and other stakeholders, should there be any future plans to substantially change the use of the external spaces from their current use.

Despite the urban grandeur of City Park West the masterplan is human-scaled, designed to be experienced at a leisurely pace and built with familiar materials. The network of streets and spaces which bind it together are pedestrian and bike-only, and the surfaces of all the buildings, old and new, are rendered in brick, a building material inextricably linked to the idea of home. Throughout the development a variety of bricks types are used to accentuate a transition from the north to south, from hard to soft, textured to smooth, heavy to transparent, matt to reflective.

As well as reviving a brownfield plot to create a walkable and cycle-friendly neighbourhood that makes a huge dent in the scheme’s vehicle-related carbon emissions, City Park West is an exemplar of multi-generational planning providing a range of home types and tenures means that families, first time buyers and older citizens requiring extra care can all live in central Chelmsford.

Jobs are also central to the success of City Park West and have emerged out of the sensitive approach to re-use: The Anne Knight Building, a former Quaker meeting house built in 1823–4, its wide porch on two sturdy Greek Doric columns a familiar local landmark, is now a restaurant after years of dereliction.
Similarly, the Frederick Chancellor Building, designed in the late 19th century by local architect and Chelmsford's first Mayor, Frederick Chancellor, is now a regional headquarters and call centre for Notting Hill Genesis, giving the project client an immediate presence on the site that they still own and manage.

And the Law Building is an interwar art deco building used as offices and lecture rooms for Anglia Ruskin University has been reworked to provide 10 penthouse apartments and three storeys of new office accommodation for a local Chelmsford housing association.

City Park West’s excellence resides in its multi-faceted placemaking approach: as well as providing a walkable and cycle-friendly multi-generational neighbourhood, it creates four new public squares, brings heritage buildings back into use to create local jobs, and on a city-wide masterplanning scale, functions as a missing jigsaw piece. By reconnecting the large open green space of Central Park to the south with the civic quarter and historic core to the east and the arts district in the west end, it bestows upon Chelmsford a newfound coherence – in response to both the 2006 Town Centre Area Action Plan and it being granted city status in 2012.

There’s more – in the form of its integrated water and landscape design which acknowledge local history while providing a new place space for families with young children who flock to play amidst its varied landscape.

There’s excellence too, in the public art. One piece sees text inscribed throughout the site - on benches, across steps, and most prominently within a 'stream' of granite paving that connects the two main water features of the site. It is inspired by the history of Anne Knight, the famous Quaker abolitionist and suffragette from Chelmsford - after whom the refurbished Quaker meeting house was named - with the words drawn from her writings.

Elsewhere, another work, explores the relationship between contemporary urban surveillance and cinematic experiences. It utilises four cameras placed in separate locations around the square to create a permanent video installation onto an enormous video wall facing onto the new fountain at the base of the tower.

Taken together, these facets show City Park West’s holistic urban design is more than mere aspiration. What’s more, not only is it a great place to live, it’s fun to visit too. 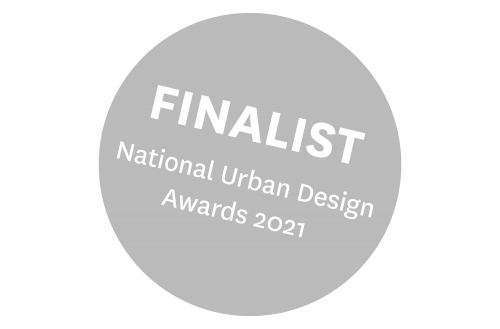 "This project delivers on best practice across a number of disciplines to create a blueprint for development anywhere. The fact that this has been done on a complex site in a shire county town makes it a valuable model for urban regeneration, with high-quality architecture and human-scale public realm."