Towards an Urban Renaissance

There are two ironies when comparing Towards an Urban Renaissance with its closest contemporary analogue Living with Beauty (2020), the report of the Building Better Building Beautiful Commission (BBBBC) chaired by the late Sir Roger Scruton. Both are reports from government commissions led by controversial advocates for better design. Both chairs were closely aligned with the conflicting ideologies of the commissioning body: Rogers is a Labour peer; Scruton was a fiercely right-wing philosopher. Both address poor quality urbanism.

These are not the ironies. The first is that, despite Rogers being a Modernist architect and Scruton a profound traditionalist, both start from a rose-tinted description of a past era, what the Urban Task Force (UTF) calls ‘the best urban tradition’, stretching from Ancient Greece through Renaissance Florence to Georgian London. The BBBBC asks: ‘What stops us building as beautifully as the Georgians and Victorians?’

The second is that the government would not allow Rogers to use the word beauty because it was too subjective, whereas the whole purpose of the BBBBC is to inject beauty into place-making. This was what Rogers wanted too but he was compelled to use words like ‘design excellence’, ‘quality’ and ‘creativity’, which weakened the force of his argument.

This tells us that urban design and place-making are never purely technical. The genesis of the UTF was political. It emerged from the same crucible of ideas as New Labour’s other policies for the transformation of Britain after Blair’s election in 1997. Three Cabinet ministers, John Prescott, Chris Smith and Lord Falconer, had a passion for improving the built environment, which gave political impetus to the UTF. The UTF included leading professionals, academics, local government representatives and business people, and had many expert advisers. What resulted was immediately influential: it certainly influenced the next 13 years of my career and those of many other urbanists.

The strength of Towards an Urban Renaissance lies in its far-sighted focus on three relatively new drivers for change: the information technology revolution, the threat of climate and ecological change, and changing demographics and lifestyles. Recognising that places would inevitably have to accommodate these trends, the UTF took a holistic approach to using them to improve cities.

The key was to abandon the low density suburbanisation that characterised 20th century urban growth. Cities should again become compact and walkable. People would choose to live in cities because of their easy accessibility, secure and attractive places, diversity and vibrancy: describing an urban renaissance to reverse the hollowing out of inner cities with which past governments had struggled.

Unsurprisingly given Rogers’s background, the UTF’s headline recommendations led with design: the creation of a national design framework, disseminating key principles, and mandating masterplans. The first chapter of full recommendations dealt with designing the urban environment, including ten urban design principles and a spatial masterplanning checklist which, while not especially radical, were undoubtedly unfamiliar and alien to the average volume housebuilder. An important role promoting good design was proposed for the newly formed Commission for Architecture and the Built Environment (CABE).

Its holistic analysis, looking at urban lives through lenses like planning, finance, the economy, homes, movement, land reclamation, skills and stewardship, meant that the UTF was not a one trick pony. It made numerous recommendations across these canvasses. This was a strength and a weakness: a strength because the UTF defined the urban renaissance as a wholesystem project; a weakness because gaining government support for dozens of often far-reaching and contentious changes is not easy. It will be interesting to see if the BBBBC has the same problem.

Reviewing a report to government like Towards an Urban Renaissance is tricky. Most of its content is sound advice. Some is of it is of its time. Perhaps the best question is: did it work?

Yes and no. Many design recommendations were implemented. CABE was an effective influencer of design quality. Government focused much of its investment on regenerating inner areas, restoring declining urban neighbourhoods and growing existing settlements in regions with high demand. National design advice was published and integrated into the planning system. Other recommendations, such as establishing an Urban Policy Board, didn’t get far.

Cities like Manchester and London really did see an urban renaissance. Young professionals in the new IT and creative sectors chose to live in smart, modern apartment blocks in once shabby milieux. Some of this would have happened anyway but the urban renaissance gave confidence to developers and local authorities, backed by government policy and funding.

Probably the greatest disappointment was that while developers of prime urban locations like London’s King’s Cross grasped the UTF’s message, it never convinced the major housebuilders. They went on building low density, monotonous, car-based estates.

The Conservative/Lib Dem Coalition government formed in 2010 did away with CABE, the agencies delivering urban renaissance projects and the words ‘urban renaissance’. Fast forward to now: a Tory government desperate to increase housebuilding has registered that one major barrier is the exceptionally poor quality of new estates, boosting opposition to their construction. Enter the BBBBC, with its mantra, echoing the UTF that we used to do this better and should be doing it better now. In its interim report, the BBBBC acknowledged work done by CABE. Much of what it recommends is from the same playbook as the UTF, although it would be politically inexpedient for it to say so. Towards an Urban Renaissance may be on the shelf but its influence is still being felt.

Commission for Architecture and the Built Environment (2000), By Design. Urban design in the planning system: towards better practice, London, DETR 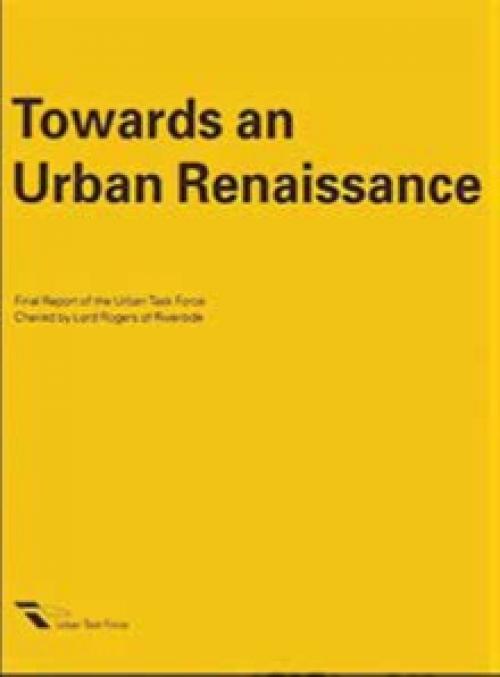