Poor public health was a major concern in 19th century England, caused by outbreaks of diseases such as tuberculosis and cholera, as well as fire and the poor construction of buildings. Half of all deaths were due to infection, and the life expectancy of children born into labourers’ families in industrial cities fell to less than 20 years of age. The scientific understanding of the spread of disease and the promotion of good health was limited, and was influenced by a view that the causes were overcrowding, bad air (miasma) damp, and a lack of light.

In response, the Model Byelaws were created as an integrated system of building control, street and urban design, together with public health measures that governed development in England from the mid-1870s for the next half century. Their significance is immense: over a third of today’s houses in England and around a quarter of the current total length of urban streets were built in compliance with the Byelaws.

The Model Byelaws were part of the Public Health Act 1875, which enabled local authorities to determine how a landowner developed an estate by dictating the layout of streets and the erection of buildings. The Act also created powers to regulate parks, pleasure grounds, mortuaries and slaughterhouses, to control lodging houses, and to create systems of sewers. Necessary work was to be funded by rates and loans. Local authorities were expected to implement the Act by creating byelaws, subject to approval by the Local Government Board. The Board produced a set of model byelaws to aid that process. The Royal Institute of BritishArchitects was involved in providing advice on the Byelaws for new streets and buildings. Private publishers produced guides to the Model Byelaws, adding explanations, case law and local variations approved by the Local Government Board. Successive editions of the byelaws provided new and amended clauses reflecting new legislation (e.g. Public Health Acts Amendment Act of 1890) and advances in best practice.

REACTIONS TO THE MODEL BYLAWS

There were objections to the Model Byelaws; in 1901, Country Life magazine for example, ran a campaign against them and portraying them as vexatious and oppressive, adding unnecessarily to the number of officials paid from rates. The campaign characterised the Local Government Board as reactionary and bureaucratic, and protested that the Byelaws added unreasonably to the cost of building, promoted the deadliest monotony, destroyed all traditional building design, stultified invention and prevented improvement. One cynical argument was that the new standards made it impossible to construct cheap houses for labourers, leading to the construction of fewer houses and therefore increasing overcrowding and disease. There was also resistance to political interference and additional taxation. Even so, one of the main arguments for making improvements was economic: disease created orphans and families that were then dependent on poor relief, which was paid from the rates.

REFLECTIONS AND LESSONS FOR THE FUTURE

There are strong parallels between the 19th and 21st centuries. Ignorance continues to be a huge barrier with concerns taking decades to be recognised and addressed. While science has advanced greatly, even in the 21st century it has taken time to explain the principal means of transmission of SARS Coronavirus II, leading to mistakes in epidemic control and a void in our knowledge, filled by denial and quackery. Politicians and the public remain blasé about long term threats such as biosecurity and climate change.

Tensions between the private and public sectors persist. There is conflict between those who demand regulation and those who advocate a laissez-faire approach. Some companies trade on their reputation, while others try to get away with doing little. The Model Byelaws were criticised for promoting monotony, but the authors of the monotony were housebuilders motivated solely by profit. In 2021, pursuit of profit leads water companies to discharge untreated sewage into coastal waters and rivers, and housebuilders to build housing that falls far short of zero-carbon standards. Windowless housing, now possible thanks to permitted development regulations, was prohibited by the Model Byelaws. There seems to be an eternal cycle of regulation followed by deregulation, followed by disaster and re-regulation.

The 1875 Act called for ‘fit and proper persons’ to be employed by local authorities. Professional standards and skills are an issue today, highlighted by the 2021 Urban Design Skills Survey, and brought into sharp focus by the Grenfell fire and the subsequent public inquiry. At the very least, a local authority needs to have sufficient in-house expertise to enable it to act as a ‘competent client’.

Epidemic diseases cast a shadow over the 19th century, and in preceding centuries too. We forget that the Black Death was not a one-off outbreak, but a recurrent epidemic which, along with other diseases, reduced the population to such a degree that no new towns were built for two centuries. To think in terms of a post-pandemic world is to ignore history. When we plan, design and build, we must have pandemic resilience in mind.

Perhaps the main lesson to draw from the era of the Model Byelaws is that, although it took 50 years to respond to public health crises, when the measures were followed, they were effective; deaths from infectious diseases fell progressively and a century of good health followed. Yet despite obvious benefits, people campaigned against public health measures in the 19th century and people do so in the 21st century. For anyone thinking about campaigning for public health, zero-carbon, active travel or beauty: don’t expect quick results and be prepared to continue long after the first victory. 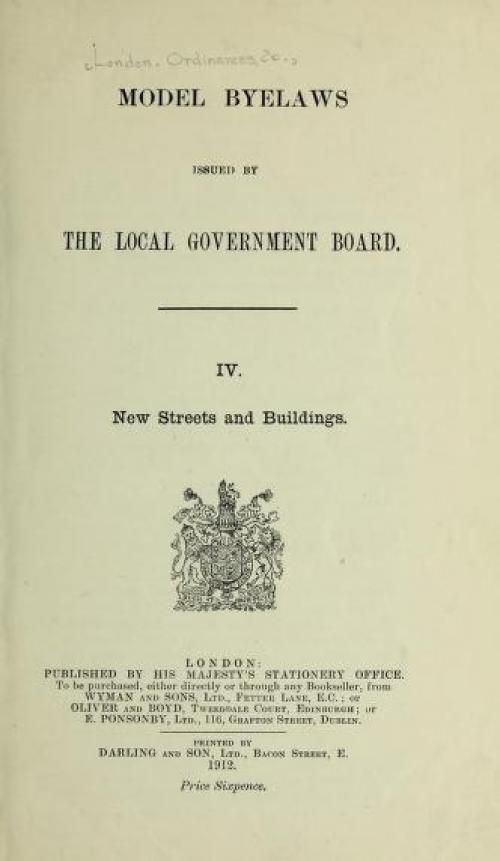 Published
Reviewed By
Robert Huxford, UDG Director, with grateful thanks to Judith Ryser