England and the Octopus

By today’s standards this is an odd book. The language is colourful and its argument diffuse. It displays prejudice, jingoism and polemics and the text bears signs of a world still recovering from the effects of the first European war. Clough Williams-Ellis was only 29 years old when he wrote it in 1929, and had just built Portmeirion, the faux Italianate village in North Wales. He became the first chairman of Stevenage, the first English New Town.

Williams-Ellis divides his discussion into twelve chapters including A Devil’s Dictionary, Containing Some Specific Complaints, and Warnings and Proposals. This section alone is worth revisiting as there are parallels to a number of situations today. Written by Patrick Abercrombie, then Secretary of the newly-formed Council for the Preservation of Rural England (later the Campaign to Protect Rural England, now known as CPRE), the epilogue gives a clue to the main thrust of the book’s message.

The octopus in the title is intended to be 1920s’ London, expanding with significant development along the tentacle-like main arterial roads, swallowing up what Williams-Ellis saw as the essence of the English countryside. His first chapter bemoans the spread of low density development beyond London and pleads that ‘Having already had the larger part of the South Downs filched from us…’ there is a need to control development if anything is to be left of the countryside for future generations to enjoy. The South Downs now form England’s youngest National Park, a concept promoted in the book.

Without statutory control to aid his campaign Williams-Ellis sought, in chapter two, to rally all those who care, in amenity societies or local groups, to come together to champion what in their view was beautiful. Shades of NIMBYism perhaps, but anticipating today’s growing need for local groups to act in the light of the decreasing local authority resources.

In chapters three and four, the author’s message tends to be lost in a diatribe against industry and a hankering after the world of William Morris and Ruskin. His prejudice against bungalows is evident in his dislike of Peacehaven and Waterlooville on England’s south coast, where low density development went uncontrolled in the 1920s. His message remains relevant: if there is damage to the environment today, it will remain as damage in the future. Now is the time to ‘do something about it’.

Williams-Ellis’s dislike of uncontrolled development and the unpleasant conditions created by placing houses and manufacturing in close proximity comes to the fore in chapter four: Some causes of urban beastliness and of the consequent rush to escape. His concerns were clearly legitimate in the 1920s and explain why we need to unpick the sterility of zoning in many urban areas today with mixed work and living spaces.

Not wholly negative though, Williams-Ellis makes a plea for New Towns for Old. His England was undergoing change: birth rates were falling, agriculture was declining, and heavy industries were closing. He calls for coordinated government-sponsored action and for surveys and plans, taken for granted at present, but threatened by a reliance on the private sector to resolve our problems. Williams-Ellis mentions Welwyn Garden City but fails to acknowledge the financial mechanism that enables garden cities, whereby through buying cheap agricultural land, the garden city builders were able to enjoy an uplift in value not available in today’s market. He has a romantic view of continental examples and would have imported Soviet ones too. Had he really seen Baku, one wonders. He is however realist enough to accept that for his ideals to be achieved, bold parliamentary action would be needed and ‘Private ownerships, vested interests and finance would all be difficult to deal with’.

From New Town idealism, Williams-Ellis moves to ‘the laissez-faire towns’. Using an imaginary case study, he demonstrates how the free market can destroy what is valued and how short-termism and strict departmentalism can have consequences from which the environment can never recover. Luckily his wider aim of introducing planning controls has been realised, but insufficiently to prevent the homogenisation in the high street, where the thrust of corporate imagery can still destroy local character and ignore the special form of an individual building.

Williams–Ellis continues his diatribe against developers in the next chapters and his message may be lost in his extreme prejudice and elitism. Today we can take a more measured approach, as society has become better informed about environmental issues, arguably to his call for wider environmental education. His concern about the loss or insensitive conversion of the nation’s stately homes sowed the seed of listing and protecting buildings of note. Chapter 10 The Beneficent Busybodies, is essentially a plea for amenity societies, and includes a short beginners guide to what to look for in a building, reminding us of what makes a good building in any context. The final chapter Devil’s Dictionary ranges from advertisements to electrical power distribution (today akin to wind farms and solar collectors), and from local government to trees. Each element is subject to astringent analysis and is often relevant in Britain today. Abercrombie ends the book in a quaintly entitled Epistola Epiligica, a plug for the CPRE, but also a demonstration of stakeholder action. An interesting gallery of development horrors rounds off the book.

Is the Octopus relevant to us today? It is certainly a reminder of the need for development control and continued vigilance regarding the dangers of an unconstrained free market approach. This book, which may well have influenced planning legislation in its day, is worth reading today. No equivalent contemporary book comes to mind, but I hope we have learnt Williams-Ellis’s lessons, and there is no harm in reminding ourselves of the dangers of relaxing our guard. 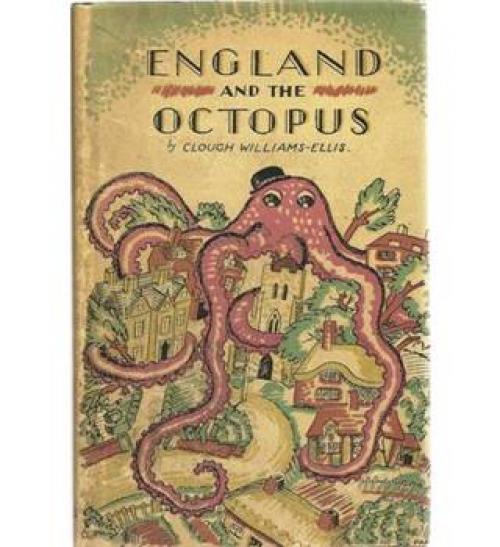