As Executive Director of the Philadelphia City Planning Commission from 1949 to 1970, Edmund Bacon played a major role in shaping modern Philadelphia. Design of Cities is a distillation of design strategies from cities throughout history, which Bacon sought to apply in Philadelphia. I first read it at university, and my main memory was of its rich graphic material. Re-reading it today I find that the illustrations remain compelling. Bacon manages to be both detailed and expansive, examining key components of city design from the square through to the city region, whilst weaving in design theories and guiding principles via references to art and philosophy.

A fundamental aspect of the book is Bacon’s explanation of spatial experience. He defines architecture as an ‘articulation of space so as to produce in the participator a definite space experience in relation to previous and anticipated space experiences’, succinctly capturing how buildings define and make a space comprehensible and articulate a notion of time, via the lived experience of moving from one space to the next.

Bacon believes that ‘involvement’ is key to spatial experience. Architecture is to ‘be in’ not just to look at, and there are eight key urban design elements that help to achieve this:

Designers should strive towards ‘total involvement’ within an environment; dissolving the distinction between inner and outer spaces and thinking holistically. Cities through history Bacon uses historical and contemporary plans, sketches, diagrams and art to explain defining moments in the history of major cities and smaller settlements, and to articulate key design principles. He unpicks inflection points in urban development to show the fundamental forces that structured places. Starting with ancient Greek and Roman settlements, the book distils elements that created design order and established the means of growth. It illustrates the fundamental importance of the square to medieval city structure; how this enabled a purposeful extension towards an outward point where it ‘clamps onto an expression of the forces of the region’; this in turn underpinned the Renaissance imposition of order, facilitating a city-wide approach to design that reached an apogee in Baroque Rome. Bacon then shows how the development of Paris articulates the full range of design forces from the Roman period to present day, extrapolated with a ‘thrust of design which conveyed the energy’ beyond city walls across the countryside to produce the first truly regional scale of city development.

This thinking is then applied to Philadelphia. Bacon uses projects he worked on, such as the Society Hill neighbourhood redevelopment project. He explains how design forces from outside the area determined the position for three towers, which resolve the area’s design structure, act as visual linkages between pedestrian and automobile systems, determine the urban form and ultimately guide architectural expression. This was one part of the total design effort at a city-region scale a la Paris that he hoped would revive the city centre and Philadelphia’s fortunes in the face of declining industry and suburban flight.

A recurrent theme is the fundamental importance of movement systems – the paths of pedestrian and vehicular traffic, public and private transportation – as an organising force in cities throughout history. The Panathenaic Way is an early example, both a processional route and the single central movement system, underpinning and organising Athens’ structure. Later, Bacon unpicks the importance of Pope Sixtus V’s work to Baroque Rome’s movement structure, channelling both movement and energy, and guiding the subsequent architectural response.

Bacon explains that early movement systems were based on perception derived from a relatively consistent speed. The arrival of motorised modes created simultaneous movement systems of different speeds, and therefore different spatial experiences. In relation to Philadelphia, he considers how overlaying and interconnecting movement systems – vehicular, pedestrian, transitbased – are defining features of modern city structure and design. He does not question the primacy of fast, vehicular movement and expounds that the spatial experience of city must reflect the view at different speeds, stating that ‘if we are to establish tensions across movements in our urban spaces, how much more careful we must be when we compare the demands of fast movement on the expressway with that which was needed to create harmony on the Panathenaic Way’.

Design of Cities takes a grand city-wide approach to planning and urban design, often based on sweeping physical changes. In this way it reflects a top-down, expert-led and post-war design approach. Re-reading the book, I find it striking that despite the emphasis on total involvement and spatial experience, Bacon does not discuss daily life in spaces. People and their activities are absent or abstracted. The approach is the opposite of Jane Jacobs, whose Death and Life of Great American Cities preceded Bacon’s book by six years. Tellingly, in 1954 Jacobs wrote an article regarding one of Bacon’s Philadelphia redevelopment projects that criticised its impact on community life, and which spurred her to question the post-war urban planning approach. Perhaps Design of Cities was already out-of-step with the zeitgeist by the time of its publication. Despite this oversight, the book is a fine synthesis of spatial theories and the forces that underpin and structure city design at various scales. The engaging illustrations clearly explain how various design elements work in concert. As such, I find it remains a valuable exploration of city development through history, of the design factors that shape spatial experience, and the importance of movement systems in this experience. 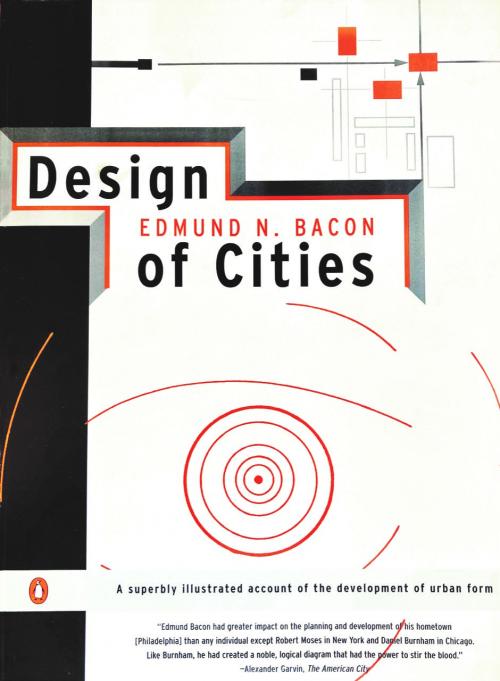