The Dictionary of Urbanism

'The Dictionary of Urbanism: informed, inspiring and entertaining' -- Dan Cruickshank

'I have only had this book a couple of weeks, but already I wonder how we ever did without it' -- Joe Holyoak in the Architects' Journal

'My unalloyed pleasure at this book derives from Cowan’s incredibly broad-church approach to urbanism, and his clear and concise definitions. Any dictionary that contains on the same page a reference to R&B legends Martha and the Vandellas, Marxism and master plan deserves one’s custom'-- Hank Dittmar, chief executive of the Prince’s Foundation for the Built Environment and chair of the Congress for the New Urbanism, in Context

The Dictionary of Urbanism is the latest book by Urban Design Group director Rob Cowan. The 500-page dictionary is expected to become a standard reference.

It defines and explains almost every word or phrase that a councillor, developer, built environment professional or community activist is likely to hear, read or write. It explains the key concepts of urban design, planning and regeneration, describes the work of pioneers who have inspired new ways of thinking, and shows how urban life is portrayed in the arts and popular culture.

The dictionary is illustrated by Lucinda Rogers, whose drawings of urban life appear in The Guardian, Daily Telegraph and New Yorker.

Review in the Architects' Journal, 28 April 2005, by Joe Holyoak

This book is infuriating. You go to look up, say, Raymond Unwin, but on the way you are distracted by Urban Decay (‘a range of cosmetics launched in 2001, apparently aimed at the young and streetwise’). Then your eye lights on urban buzz, which has a reference to Gazzard’s Law of Urban Vitality. What’s that!? You turn back, and find it states that ‘it takes 100 Australians to create the same urban activity as 10 Italians’. Next to this is gay index, with a reference to Richard Florida. That irrationally prompts you to look up Seaside. And so randomly on, until you have forgotten all about Unwin and realise that another 20 minutes of your life has passed.

But you now know a lot you didn’t know before. The dictionary tells us that the term urbanism was first used by Idelfonso Cerda, the planner of the expansion of Barcelona, in 1867. But until the last ten years, urbanism (‘the study or appreciation of the processes of change in towns and cities; making towns and cities work; town (UK) or city (US) planning’) was the concern of a small number of specialists. Since John Gummer, Urban Task Force and CABE, it has now moved to a more central position in the country’s life, enlisting the contributions of a number of different professions. But regularly we baffle each other with the different expressions that we use, and the different meanings that we attach to the same expressions.

Rob Cowan is an experienced urbanist who has a foot in several camps: he is director of the Urban Design Group, an academic, an urban design consultant, and has contributed to several key publications on the subject in the last few years. One of the strengths of his book is that it collects words used by different groups - urban designers (visual appropriateness, permeable), architects (fenestration, orthogonal projection), highway engineers (modal split, road pricing), property developers (non-recourse finance, ground rent), town planners (structure plan, plot ratio), urban historians (Cutteslowe wall, Wenceslaus Hollar) - as well as from popular culture: squeegee merchant, giro drop and break dancing.

Cowan seems particularly keen on popular music associated with urban culture, with entries on The Clash, Dancing in the Streets, and hip hop among others. The promiscuous mingling in the book of higher and lower culture, of professional jargon and street slang, is rather like real life. His entry on built environment professionals’ dress sense, with anecdotes about Koolhaas, Libeskind and Mart Stam’s trousers, is hilarious. He is an opinionated lexicographer in the Samuel Johnson tradition, and writes with a dry humour. “Icon.....sometimes seems to be used to describe any building not specifically designed to be self-effacing”. Alison and Peter Smithson’s  use of ‘streets in the sky’ at Robin Hood Gardens is ‘an arrangement traditionally used in prison’.

Terms used in US urbanism are often significantly different from ours, and are sometimes imported uncritically and misused: new urbanism is an important current example. Cowan includes lots of US expressions and distinguishes them from ours, and also words from French and German urbanism that we might sometimes hear. The book has elegant line drawings by Lucinda Rogers, who has the ability to make even the most mundane street scene look fascinating. Her drawings match the entries’ mixture of the learned and the demotic. She also draws portraits of many of the people featured in the dictionary, which I feel do not contribute so much.

Yes, the dictionary contains mistakes and omissions, but I shall not take up space listing them here. Instead, I shall send them to www.urbanwords.info, where my suggestions can be added to the website which accompanies the book, and maybe to the next printed edition of the book itself. I have only had this book a couple of weeks, but already I wonder how we ever did without it.

Joe Holyoak is an architect and urban designer, and reader at Birmingham School of Architecture

Review in Context, the journal of the Institute of Historic Building Conservation, November 2005, by Hank Dittmar

Partly this is due to Rob Cowan’s sly sense of humour, recognisable even to this supposedly irony-challenged American. His jokes pervade the entire book, complementing the complete and serious definitions in a delicious manner. Partly the guilty pleasure comes from Lucinda Rogers’s line drawings of urban scenes and noted urbanists. They enliven the volume and add another layer of commentary.

But mostly my unalloyed pleasure at this book derives from Cowan’s incredibly broad-church approach to urbanism, and his clear and concise definitions. Any dictionary that contains on the same page a reference to R&B legends Martha and the Vandellas, Marxism and master plan deserves one’s custom.

When one digs into the actual definitions, one is rarely disappointed. Sure, I was a little miffed when Cowan’s definition of ‘new urbanism’ devoted as much attention to the criticisms of libertarian academics as it did to a discussion of the tenets of the movement, but I was also pleased that he took the trouble to include the entirety of the Charter of the New Urbanism. For a recent immigrant to this country, his definitions relating to the planning process and the Sustainable Communities Plan are quite useful, although one wonders how often they will require updating – but Cowan promises to do that through a website (www.urbanwords.info).

Cowan acknowledges that it is difficult to pin precise definitions on many of the terms used by planners and architects when speaking of the city. Not only do people have different meanings for the same term, I am convinced that people deliberately use words in new ways in order to appropriate useful words (and the values associated with them) for new purposes. In other words, I am convinced that when Richard Rogers and I talk about density, we are not talking about the same thing.

This volume deals with that dilemma in the way that dictionaries often do: by providing alternate definitions. This is a neat solution for the lexicographer, but a lousy solution for the profession, which badly needs to start by agreeing on the meaning of words for various bits of the city, as a first step for beginning again the effort to plan the town and country in a coherent way. Of course this is a problem for a consensus process, and it can not be solved by a single author.

Only one other quibble arises with respect to The Dictionary of Urbanism: the fact that many of the design terms could be better described with a drawing or a photograph. In such a richly illustrated book, it should have been possible to define a few key terms with a line drawing or a chart. Including images of this kind would have reduced the ambiguity that is always introduced when one talks about a visual and physical subject in purely written ways.

My colleague Ben Bolgar is fond of showing a slide of the tower of Babel when he speaks about the need to supply participants in the process of designing their communities with a grammar and a vocabulary of design. The Dictionary of Urbanism goes a long way toward meeting that need. In the too many months since I agreed to write this review, this book has been – and continues to be – a useful reference.

Order the book (by credit card, or ask to be invoiced) at www.urbanwords.info 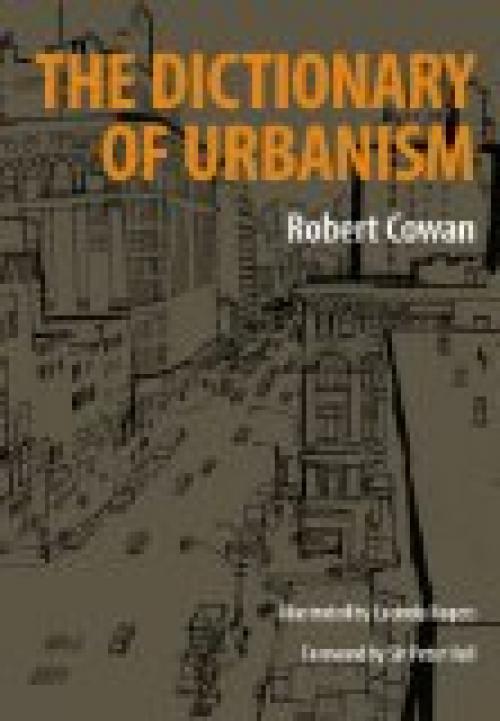