This issue has been generously sponsored by Turley Associates

This issue of URBAN DESIGN visits Central and Eastern Europe 25 years after the fall of the Berlin Wall. Some forty years of communism, from the Second World War until 1989, have left a tangible mark on the structure of Eastern European urban settlements, with its heavy-polluting industries sparsely sheltered by rows of trees, and large-scale prefabricated housing estates.

The articles in this issue from Aleksandra Stupar and Mira Milakovic on New Belgrade and Bucharest by the Centre for Environmental Research and Impact Studies at the University of Bucharest illustrate three phases of change, and current urban design solutions, whether through spontaneous action or central control and free market principles.

Reusing large amounts of brownfield land in post-communist Europe has created a need for better environmental management, with lessons from Slovakia, the Czech Republic, Poland and Freiberg set out by Anna Starzewska-Silkorska and collaborators on the Circuse-eu project. At the other end of the scale, fine-tuning is going on in many cities; in Budapest high streets are suffering a decline and require imaginative urban design solutions, including for temporary uses, as described by Daniela Patti and Levente Polyak. Older urban structures, such as the famous Red Vienna housing estates have high quality communal spaces, yet research by Lilli Licka and Philipp Rode shows the difficulties of attaining that interwar quality in new schemes.

At an urban scale, many Eastern European cities are lacking a convivial public realm including open and green spaces, as Dalia Bardauskiene reports, and Vilnius is rectifying this at the city-scale despite its urban sprawl. At a larger regional scale, urban designers are aiming for greater cooperation and coordination between cities on the Baltic Sea, between Gdansk and Gdynia, as Piotr Lorens and his colleagues at the University of Gdansk reveal. The final article shows how Berlin’s citizens are intervening to affirm their rights to the city in the face of global financial investment, as George Hubman and Jana Perkavic report.

This year’s Urban Design Awards winners are also featured in this issue from the evening ceremony in February 2014 with the full line-up and where to find the winning and shortlisted entries in past issues, plus the winner of the new Developer Award which went to Barratt East London, and the Lifetime Achievement Award presented to Professor John Punter. This year’s Student Award won by Sarah Cawrse on designing incentives for healthy lifestyles is also a two-page feature.

Regular sections include the Urban Design Library on The Image of the City by Kevin Lynch, the Urban Design Interview: What urban design means to me by Matthew Lappin, new book reviews, a report on the UDG’s latest activity and events, many of which are also available to watch online, plus the Endpiece by Joe Holyoak looking at garden city concepts.

URBAN DESIGN is the leading journal in its field. Each issue provides in-depth analysis of topical themes, with contributions from leading practitioners, policymakers and academics from the UK and abroad. 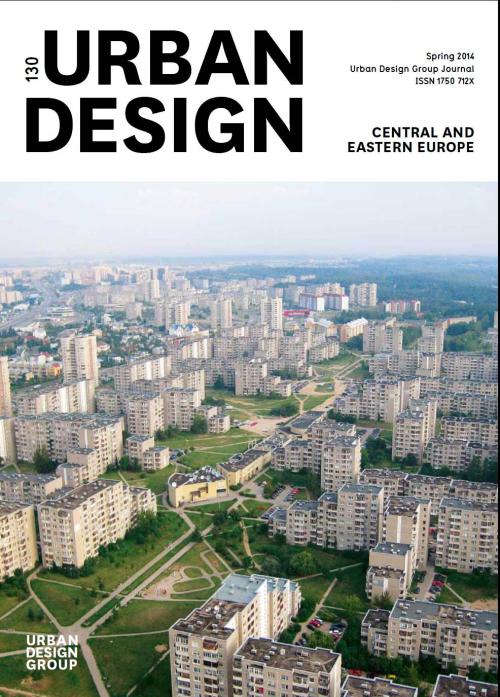