ART IN THE PUBLIC REALM

This issue has been generously sponsored by Wei Yang & Partners

This issue of URBAN DESIGN looks at Art in the Public Realm and the guest topic editor is UDG Patron Lindsey Whitelaw. A passionate supporter of art and the role of artists, Lindsey has sourced articles to broaden our perceptions of how artists engage and contribute to the urban environment, and contribute to the debate about what is public art.

They include artist and curator Michael Pinsky who with Stephanie Delcroix has been employed to create a cohesive artistic programme for the King’s Cross area. The construction process, which will take a generation to complete, has to bring positive value to the area, and this is being achieved through the artistic programme.

Graham Roberts and Andrew Knight of RKL Consultants expand on the definition of public art and their role as public art consultants. Structural engineer Mark Whitby offers a poetic essay on the symbolic and sculptural value of bridges. David Taylor of Urban Engineering Studios explores the transport and highway engineer’s perspective, questioning how the lateral free-thinking approach of the artist can work within the more pragmatic and scientific realm of the engineer.

Urban designer and architect Rachel Simmonds presents a case study of Castle Square in Stranraer, Scotland, which demonstrates a seamless integration of art and landscape in the public realm. Coventry’s Phoenix Initiative has been held up as a flagship for art-led regeneration (and first appeared in the October 2000 issue of Urban Design Quarterly). Since then it has been both commended and subjected to vociferous criticism, and so Neil Deely revisits it to explore whether it has withstood the passage of time.

Landscape architect Johanna Gibbons and muf artist Katherine Clarke engage in conversation to explore public art from their own disciplines, and discover much common ground. Rosie Freeman, performance artist and writer, explores more transitory interventions which leave a lasting impression. Satu Streatfield, lighting designer, explores the boundaries between art, lighting design and light art, and lastly Kat Martindale reviews the link between sport and art, and the legacy aspirations attached to it.

This issue also features the first of the 2013-4 Francis Tibbalds Award entries – four shortlisted practices URBED, Urban Initiatives Studio, AREA, and John Thompson and Partners - with projects ranging from Strathspey, Middlehaven, Birmingham to Kent. In addition the renamed Book Award has attracted eight books, which are reviewed. The award winners will be announced in the National Urban Design Awards in February 2014.

Regular features include news from the Urban Design Group’s Annual General Meeting and reports on the UDG’s latest activity and events, which are also available to watch online. This time the new style Urban Design Interview: What urban design means to me is with Michael Cowdy, plus there is the Endpiece by Joe Holyoak looking at formal and informal public art in Birmingham city centre. URBAN DESIGN is the leading journal in its field. Each issue provides in-depth analysis of topical themes, with contributions from leading practitioners, policymakers and academics from the UK and abroad. 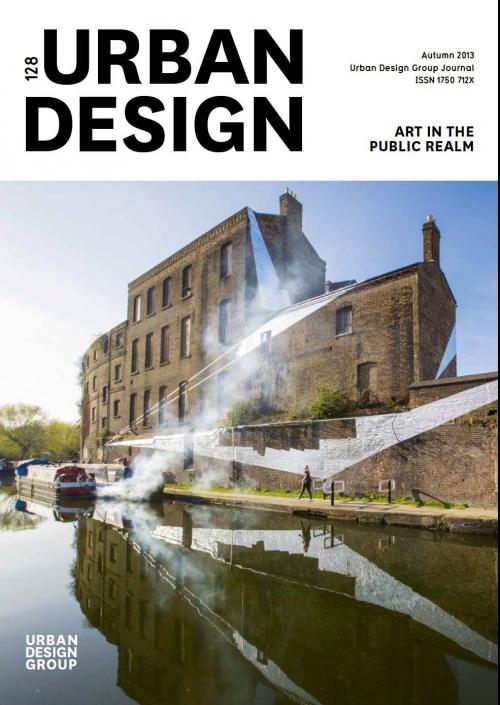