One hundred years ago, in July 1909, Burnham’s Chicago Plan, the model for the City beautiful school of planning, was published. It was particularly influential in the United States but it was also a reference for urban designers throughout the world during a good part of the 20th Century. Issue 111 of URBAN DESIGN celebrates this anniversary not just by looking at the Chicago plan itself, how it was developed and what it achieved, but also by considering other city scale designs in this country and abroad. Jonathan Bore analyses Birmingham’s Big City Plan, perhaps one of the most interesting examples of its kind, whilst Neil Emery argues that in the case of Plymouth both the local and the city-wide scales are combined in planning the city’s future. Amy Pressman compares the design of new capital cities in the 20th and 21st Centuries. From Berkeley, California, Professor Bosselmann looks at the evolution of cities from a great distance and makes a fascinating comparison between some of the world’s largest conurbations. Finally Paul Fraser wonders whether the eco-towns programme is ambitious enough.

Other contributions to this issue of URBAN DESIGN include an very topical argument in favour of Sustainable Urban Design by Professor Matthew Carmona, a recommendation to improve Conservation Area Character appraisals by Derek Abbott and John MacBryde and an attack against rates imposed on empty properties by Lee Pugalis.

The last two projects shortlisted for this year’s Francis Tibbalds Award are also published in this issue: Richard Reid and associates present their development for a holiday village, the Lower Mill Estate in Clearwater; Planit show how urban design added value to a pre-existing master plan fro St. Petersfield in Ashton-under-Lyne.

As usual there is more in this issue of URBAN DESIGN; a contribution from CABE Space and the regular interview of one of our members, book reviews and reports of events, plus the usual Endpiece by Joe Holyoak 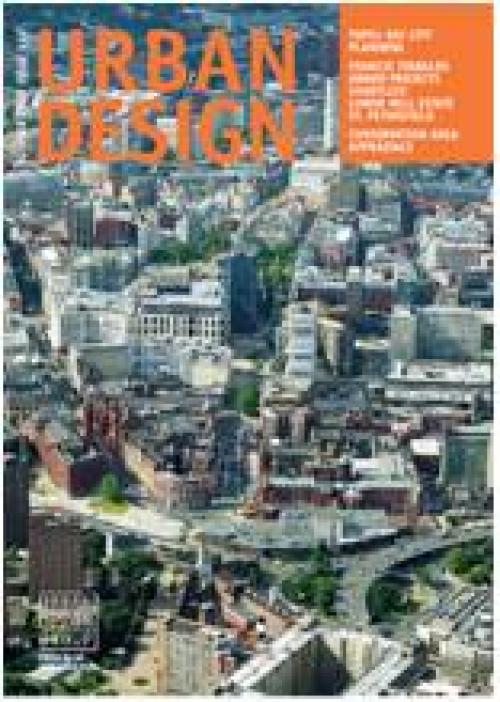