When designing, designers use rules of thumb, which they acquire over time. Some of these become codified as good design principles, or even more formally, make their way into design standards. The problem with such rules, principles and standards is that as they are met, their implications are often ignored. This is a problem particularly in complex design fields such as architecture, urban design and highway design. The built environment is extremely complex and with the increasing specialisation of technical knowledge, every design profession focuses on issues of particular concern to their specialism. In designing cities, standards applied by highway engineers have, over the last 20 years, attracted particular criticism for narrowly focusing only on their standards which aim to get vehicles from A to B as quickly as possible, at the expense of all other street users and almost every desirable quality of cities: clean air, liveability, freedom from noise pollution and safety.

Do we need another book of rules, even if it is about rules to enable walkability? Surely it is, at least in part, rules that got us into this traffic-dominated urban mess in the first place. And would anyone want to read a list of rules?

It turns out that these 101 steps are actually an excuse to tell us stories about why previous rules didn’t work, and therefore, what we should do instead. Organised into 19 parts that contain the 101 rules, the book’s logic is designed to send effective messages to design decision-makers: designers, officials and importantly, political leaders such as mayors. The book debunks or at least moderates many current rules of thumb of designing cities, by showing us the implications that those earlier rules had not anticipated. These implications are backed up by research, and so, carry substantial weight as a convincing means of political communication in support of better city design.

This brings us to another notable quality: at first glance, the rules seem to deal with a very wide range of issues of urban design, and not strictly walkability; walkability seems only to be an excuse to link this book to Speck’s previous one, which it does. However, walkability is so central to good cities, and so many aspects of good urban design – from alternative modes of transit to the pleasantness of walking routes, and the relative locations of trip origins and destinations and hence density – that the rules for walkability do indeed have to be as wide-ranging as those set out here.

So, it is not a book of rules, nor is it really about walkability. Is it a good read? Yes, I read it in one sitting. The language is direct, and to write a useful book of rules that is entertaining is quite a feat. Is it useful for promoting better city design? Yes, it draws a lot of the latest practical and evidence-based wisdom about designing cities, especially for movement. While many of the examples and some of the issues raised are particular to North American cities, it makes convincing arguments relevant to decision-makers everywhere in favour of the walkable city, which, as we have argued, is a proxy for well-designed, lively, liveable cities. Finally, back to our earlier question, do we need another book of rules? Yes, we need this one. 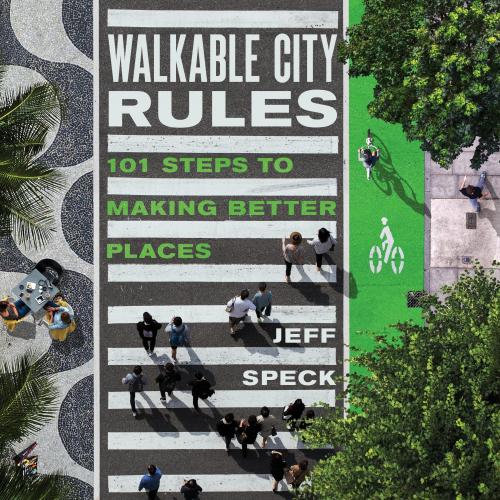