This book is the latest addition to the New Urbanism canon. In 2000 Duany, Plater-Zyberk and Speck published Suburban Nation. After nearly two decades, it seems that there is still much persuading for the New Urbanists to do. Walkable City followed in 2012 and in many ways Walkable City Rules is a repackaging of the ideas presented in that book. New elements are certainly included, and reference is made to, but no deep discussion of, the potential impact of autonomous or electric vehicles, and concerns about climate change are expressed.

What is new is the manner of its presentation. One hundred and one rules are grouped into 19 parts. Each rule is set out at the end of a short discussion. In many ways the book is like a collection of tweets, each rule an individual tweet. Together they form a code book, but as Speck reminds us, codes need to be reviewed and closely questioned.

Speck admits that the book is an artifice. The 101 rules could be reduced by half or even doubled. The 19 parts illustrate the complexity of urban design: a wide range of issues is covered, from the health benefits of walking to the importance of affordable housing downtown, and from the geometry of junctions to the need for interesting street facades. American experience is different in many ways from British experience, especially with regard to the amount of space that can be devoted to movement in urban areas. By my calculation, a total width of 47m would be needed if pedestrians, cyclists and cars were to be accommodated on a road following his recommendations. Part of this width is accounted for by Speck’s use of a parallel parking strip as a protective barrier between cars and people. This is a notion with which I would strongly disagree. Speck sees roadside parking as a benefit, slowing traffic, protecting cyclists and pedestrians and pleasing shop owners. Research done in Cheshire showed roadside parking was dangerous for children as they were hidden by parked cars and were unable to see moving cars. That difference of experience aside, Speck does draw on UK experience, and Poynton in Cheshire comes in for praise in its use of naked streets.

Overall the book is well and liberally illustrated, although some of the images are rather small. It includes a very full set of notes and a bibliography. 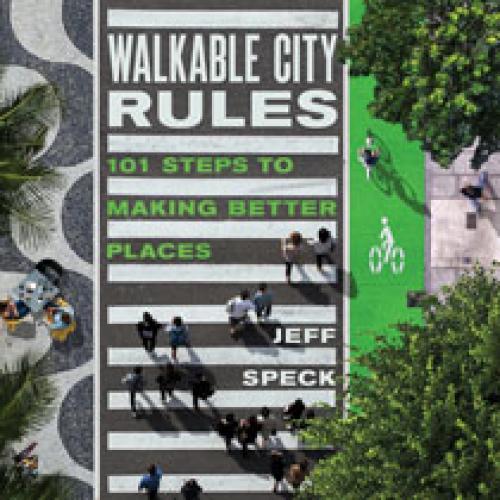