Transforming our cities for the health, wellbeing and happiness of children
Natalia Krysiak

It is a truism that we don’t design towns and cities for children. (You might argue that we don’t sufficiently design them for human beings in general, but that’s a bigger issue). We expect children to adapt to the built environment that we adults design for ourselves. The child-centred city is more written about than actually built, but the idea is growing. Being old now, I sometimes quote a professor of gerontology who was once a client, whose motto was ‘Design for the young and you exclude the old: design for the old and you include everyone’. There is a childcentred equivalent which is ascribed to the mayor of Bogota, ‘If we can build a successful city for children, we will have a successful city for everyone’.

This book is written by an Australian architect whose award from the Winston Churchill Memorial Trust enabled her to visit seven other countries to research how city authorities design neighbourhoods with children’s play in mind. The relevance of ‘high density’ in the title is that it is about neighbourhoods which do not comprise detached houses with back gardens where children can play. It is about neighbourhoods of 60 dwellings per hectare or more, where children’s play is necessarily in shared public space of one kind or another.

There is no continuous narrative: this is not a text book, but a series of case studies from the author’s research, most taking up only a double page each. It is very much a ‘how to do it’ approach. The format reminds me of Nick Wates’ handbook on participatory planning. The case studies are grouped into three types: physical design interventions, social and organisational programmes, and planning policies. The first two types are plentifully illustrated by photographs and attractive perspective line drawings, uncredited, so perhaps by the author.

It is a modest book, but a useful contribution to the growing literature on the child in the city, and I hope that it is read by the people, mostly not designers, who make the important decisions on what gets built and who can use it. My only minor reservation is that Krysiak creates a structure in which each of her 23 case studies is granted characteristics that distinguish it from the others. So we have Playable Streets, Urban Play Yard, Playful Courtyards, Child-friendly Travel Routes and so on. But actually they all join up, connected by the intention to give children an equitable status in public space, and for that space to be designed so as to fulfil their juvenile needs. 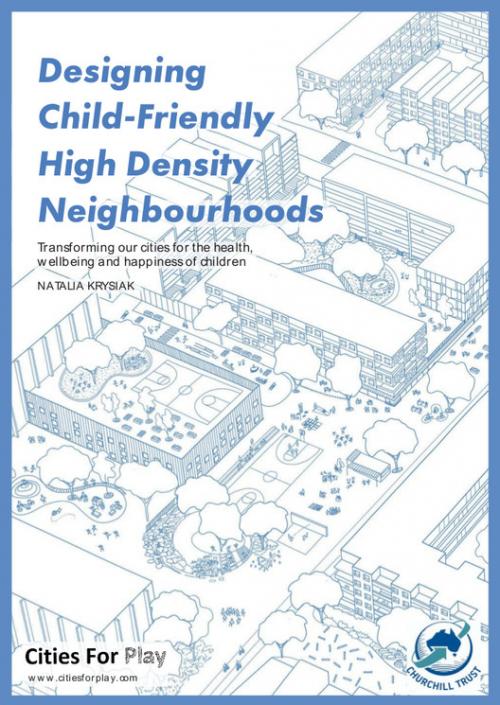