A Toolkit for Residents and Planners
Pablo Sendra and Daniel Fitzpatrick

This book emanates from cooperation between academics and community organisations and can be seen as a companion to Designing Disorder by Sennett and Sendra (see above). It is based on research carried out at UCL’s Bartlett School of Planning entitled Community-led housing regeneration: between the formal and the informal. It documents how social housing residents in London are defending their homes and communities against demolition, and emphasises their positive contribution to the care and regeneration of their areas by self-organising, proposing alternative plans and gaining decision-making powers.

Part I, analysing the tools, strategies and actors of seven case studies, includes formal planning tools as well as community campaigning and direct action. The outcome is a toolkit for communities and planners engaged in developing community-led regeneration plans and actions to take control of their estates. This includes the formal rights to transfer to and to manage community land trusts, register assets of community value, judicial reviews, as well as informal designs of people’s plans, unpaid labour, building in-house expertise, and networking between communities and blogs. The systematic presentation of the seven case studies describing the tools used - highlighting current and future challenges and proposing key lessons - makes them easily comparable. The cases also show how communities have learned from each other during their efforts to gain greater control over their estates. The abstract diagrams, which aim to synthesise the various strategies, may not necessarily appeal to all readers.

Part II presents the formal and informal tools for community-led regeneration. The twelve chapters are structured as descriptions, usefulness, difficulties, technical and financial support, recommendations for their appropriate use, with cross-references to the case studies. Formal tools include gaining residents’ control, the Localism Act 2011, policies for community participation in regeneration, using the law and challenging redevelopment through the courts. Key informal tools include the widely applicable people’s plan, together with other essential campaigning strategies, mobilising people, applying pressure, online presence and direct action.

Part III elaborates on key challenges to community-led regeneration focusing on fuel poverty, financing, knowledge exchange and organising community, set against failures to prevent demolition and the loss of social housing. The ideas have been developed during workshops which brought together residents, community activists, professionals and academics. The book concludes that people’s plans are an effective tool to progress toward more formal success, such as approved neighbourhood plans, the right to transfer management, and ultimately estate ownership. The combined use of these formal and informal tools have prevented the demolition of the case study estates, or at least led to delays. Campaigning needs to be an ongoing and long-term effort to achieve communityled regeneration. Many accounts exist on the struggles of community-led regeneration, but this book has the merit to bring the key issues together in a clear form for residents wishing to preserve their homes and communities, by gaining more control over their future and urban designers assisting them. 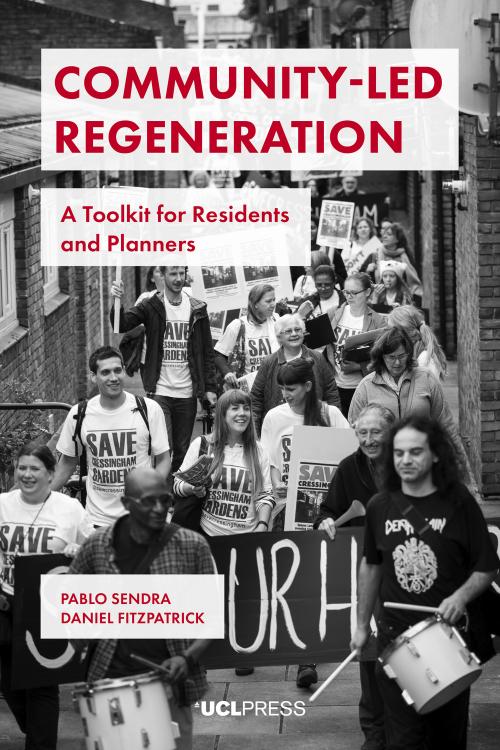