This is a well-researched and written handbook useful for all involved in curbing greenhouse gas emissions and adaptation measures against global warming at the local level. The authors, who are academics and practitioners, were actively involved over several years in the development and implementation of climate action plans, as well as sectoral goals for climate change mitigation and adaptation.

The book consists of ten chapters and two very useful appendices, one describing the main points of climate science, the other giving details of a public participation programme.

Although focused on action at the local level, the authors include the wider national and international context of greenhouse gas emission reduction targets and other state or regional objectives in different parts of the USA, not least to demonstrate the limits of local action. They give a precise definition of what they understand by climate action planning and make clear that its success depends on community involvement, approval and cooperation from conception of a climate action plan to its formal adoption, implementation, monitoring, evaluation and adjustment. For that reason they emphasise what they call co-benefits which accompany actions to reduce greenhouse gas emissions, and identify where adaptation may be necessary for coastal erosion and rising sea levels. The book includes numerous boxes with examples of how municipalities have adopted and implemented targets and climate action plans.

The authors emphasise the importance of instruments to quantify targets in two rather technical chapters on ‘Greenhouse gas emission accounting’ and on ‘Climate change vulnerability assessment’. The chapter on ‘Pathways to successful implementation’ emphasises the need for a budget and its support by municipal leaders across parties and election cycles.

They attribute the greatest chances of success to a consistent method of engaging the local community, acknowledging the efforts and sometimes restrictions that the community and individuals need to endorse in order to turn climate action plans into reality. They are also pragmatic about how much can be demanded from the general public and what advantages need to be in it for them.

The concluding chapter, ‘Time to act’, brings together the methodological, political and technical aspects of climate action planning which they see in the longer term as an inherent part of statutory local planning, in the way energy efficiency has been included in mainstream planning. The book’s key messages are: active community involvement throughout; participation by key stakeholders from the public, private and voluntary sectors; budgets secured for implementation for the short and the longer term; and, high-level political support for those responsible for climate action planning, implementation, monitoring and adjustment. 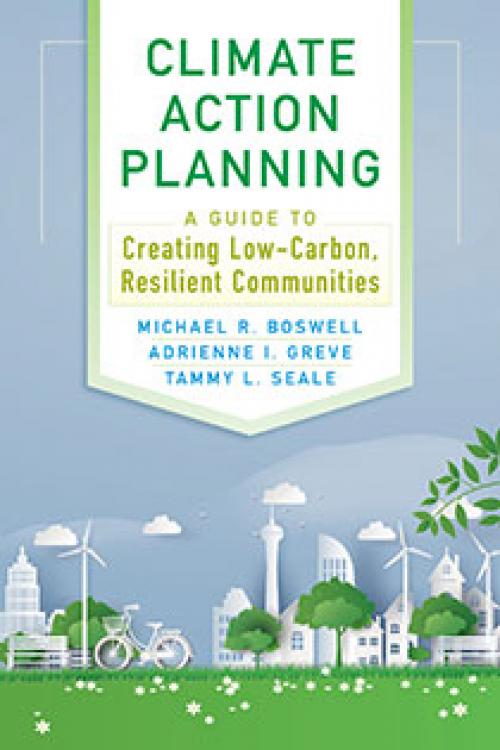