This book, written by an American landscape architect working in Vancouver, illustrates the extent to which comprehension depends on having a shared agreement on what words mean. This is made more difficult when the two sides of the Atlantic are divided by a common language. The words in question here are urban design and the middle class. I think I know what these terms mean, but throughout the book I was unsure whether the author and I had the same understanding.

Condon declares on page 1 that his subject is urban design. But as I read on, I found little connection between what he was writing about and the urban design which I was taught, and which I teach and practise. I think the explanation is that his urban design is so comprehensive that it includes the whole of town planning and urban development. He advocates that urban designers should exercise the kind of influence and power that few, if any, urban designers are in a position to possess. The book contains only two urban design drawings.

His five rules are good ones, appropriate, relevant, and well argued. They are in tune with much current progressive thinking about ecological design, the emphasis on the local, and the removal of the tyranny of the motor vehicle. They are: See the city as a system; Recognise patterns in urban environments; Apply lighter, greener, smarter infrastructure; Strengthen social resilience through affordable housing design; and, Adapt to shifts in jobs, retail and wages. There is emphasis on learning lessons from Third World informal settlements, and on insights drawn from the observation of human behaviour by Jane Jacobs and Christopher Alexander.

Condon writes persuasively and in considerable detail about his very reasonable five rules. But he finds it necessary to justify them by examining at length what he calls ‘three cresting cultural waves which are already transforming the city’: worldwide rural-to-urban migration; the collapse of global fertility rates; and, the disappearance of the middle class. Firstly, this lengthy justification, taking in fertility statistics, Thomas Piketty, spiralling housing costs, World Bank data, Marxian economics, and 24 pages of footnotes, is tiring and unnecessary. His recommendations stand up without this underpinning. Secondly, who are these middle classes who are disappearing? I am confused, and I suspect that part of the answer at least is that what Americans mean is different from what we in the UK understand. For their readers in the UK, Island Press need to take account of this semantic difference in order to ensure clarity. 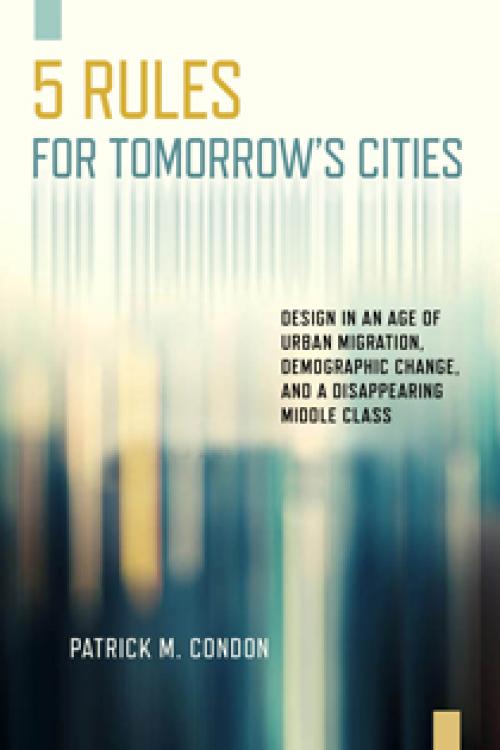