Jane Manning, Director at Allies and Morrison Urban Practitioners, finds that urban designers will have new roles in the circular economy

The terms zero waste and circular economy are now becoming commonplace in both public discourse and debate in our industry. Zero waste refill shops have sprung up in high streets, and eliminating single use plastics has become a common aim. But what do these principles mean in the context of the built environment and how might they influence our approach to places?

In thinking about what we might call ‘zero waste masterplanning’, it is less useful to think in terms of waste production or recycling rates, but rather more about cooking. The secret of French cuisine (and indeed many other cuisines) is using leftovers or very ordinary ingredients to create something magical. Each ingredient is brought together in a combination which brings out the very best in each. This sense of making the best of what you have has useful parallels for our work.

If we were to take a similarly respectful and thrifty approach to how we masterplan our urban areas, how might this play out? Sometimes our tendency is to identify buildings or spaces which do not work as well as they could, that appear misplaced or inappropriate to current or future needs. These are then included in a map of opportunity sites, which can all too quickly put them into the ‘redevelopment’ category – spaces for us to propose new designs and uses. Even when we do consider refurbishment options alongside redevelopment proposals, the decision is usually a financial one. The embodied carbon of an existing building rarely features in discussions.

So, what if the concept of an entirely circular economy underpinned our masterplans? How might the design process change? How different would masterplans look? And crucially how much more sustainable and resilient might cities and towns be?

A CIRCULAR APPROACH TO THE BUILT ENVIRONMENT

The UN Sustainable Development Goal 12 requires nations to achieve sustainable management and the efficient use of natural resources by 2030. With a significant amount of resources tied up in the built environment, our industry will be key in helping the UK meet this target. Ellen MacArthur explains that ‘a circular economy is based on the principles of designing out waste and pollution, keeping products and materials in use, and regenerating natural systems’. As urban designers, we are uniquely placed to realise the move to a circular economy; we work on a wider spectrum of projects and scales, and we often set the tone and vision for a town for the next decades, and can therefore influence the nature of subsequent development and change. We have the knowledge and skills to recognise the strengths in each existing piece of urban fabric, as well as its weaknesses.

The Ellen MacArthur Foundation provides guidance on the circular economy and the role of the built environment. To-date the focus has been two-fold: firstly encouraging those planning towns and cities to embed the principles of zero waste strategically, and secondly encouraging those designing new buildings to re-use materials. The Mayor of London has introduced the requirement for Circular Economy Statements; every major application will be required to submit a statement setting out how demand for materials will be minimised, how secondary materials can be used, how new materials are being specified to enable their reuse, and how construction waste will be minimised. The strap line is ‘Designing with Consequence: Rethink Resource Use’.

Missing from these great efforts is an appreciation of how the circular economy could be embedded between planning and architecture, at the urban design scale. To-date, the best publication on the circular economy and the opportunity for the built environment sector has been prepared by Danish architect developers, the Lendager Group. Their book A Changemaker’s Guide to the Future (2018) grasps the scale of the opportunity holistically and sparks a range of ideas for urban designers (if you’ve not read it, it is definitely one to beg, borrow or steal).

A trawl of the internet shows little evidence of urban designers breaking into this space, but perhaps this is because the circular economy is already partly embedded in what they do. Over the last five years, some fascinating schemes have been completed which illustrate just how resourceful we can be with built fabric.

In Luton’s town centre, The Culture Trust has been buying and refurbishing former hat factories. Their specific floorplates and arrangements have proved fertile spaces for re-use as creative studios, shared workspace, workshops and galleries. Elsewhere, masterplans for large brownfield sites have included the re-use of historic buildings. At King’s Cross a former boxing gym was transformed into a restaurant, the German Gymnasium, and the former railway goods sheds into a home for Central St Martins College.

In Liverpool, the Granby Four Streets scheme illustrates not just how former vacant houses can be brought beautifully back into use as homes, but also public space. The recent completion of the Granby Winter Garden has created a completely new type of space in the neighbourhood, by knocking through two terrace houses to create a community-owned space available for gardening, social gatherings, workshops and events.

At the largest scale, ingenious refurbishment schemes for sprawling retail shopping malls have taken place in north America, transforming them into office headquarters (Mayfield Mall in California), mixed use schemes (Arcade Mall in Rhode Island) or museums (Cinderella City Mall in Colorado). Coming full circle, we are now witnessing a new type of shopping mall based entirely on recycling and re-use in the form of ReTuna in Sweden. Here the retail units are housed above a recycling centre. Waste comes in at the rear ground floor and is sorted and re-used by the retailers into new products for sale upstairs.

The Lendager Group’s work in Denmark shows how new developments can be built with entirely re-used and recycled materials. The Resource Rows scheme in Copenhagen is a high density residential development recently completed as part of the wider Ørestad Syd masterplan area. The courtyard development re-uses bricks from a former Carlsberg brewery in distinctive modules to create the façade; upcycled wood from the Copenhagen Metro construction project; and, upcycled glass to create 52 greenhouses across the roof gardens. Also within the Ørestad Syd masterplan, the group’s Upcycle Studios is a live-work scheme of 20 units, which ingeniously bridges a transition between a commercial area to the north and residential town houses to the south. The scheme used 1,400 tons of upcycled concrete, as well as upcycled wood for floors, walls and facades produced from industry offcuts.

At the briefing or tender stage of an urban design project, the mention of circular economy principles could provide an interesting filter to the approach. Such a mention might place greater value on the pre-existing context, valuing the everyday not just the standout pieces in the urban fabric. In Weston-super-Mare, a much-enlarged conservation area has been designated to recognise the value of the historic structure of the town and the overall contribution of each street’s townscape, including the undervalued 20th century buildings, as well as the landmark Victorian buildings. A brief may also reflect whether the relevant local authority has declared a climate emergency, with greater impetus for a resource-minded approach to design.

The analysis stage is where a large part of the extra legwork takes place to underpin a zero waste masterplan. The usual analysis already includes a wave of data useful to circular economy principles. Understanding the layers of history of a place and the quality of the townscape, and identifying underutilised space all contribute to a picture of what can be re-used or upcycled.

A slightly more detailed appraisal of the built stock could identify the relative value of each building. By mapping the quality of the urban fabric from a range of standpoints – how robust it is, how efficient it is or could be, and the ease with which it can be adapted to new use – a more evidence-based approach to reuse could be established. Data on embodied carbon and energy performance (EPC scores) can be drawn into the analysis. Such data can also help to provide hard evidence to support the reuse of existing fabric. A typical town centre might embody 50,000 tonnes of carbon in its built fabric and cost £1billion to rebuild. Alongside a map of the utilisation of space – land uses, vacancy, intensity of use over a week – one can build a real picture of opportunities for greater efficiency. It might become more commonplace to engage conservation architects in urban masterplans to help to inform the scope for building reuse.

A character analysis of an area can identify particularly resilient and useful building typologies, as well as public space types. Revisiting or reinventing these local typologies can help to make future new development both more flexible and more context-led. At a basic level, using the historic street pattern to guide the street layout will support a more flexible fine grained urban structure, as well as ensure against the need for major new utilities routes and infrastructure.

As part of masterplans for greenfield development, we may increasingly be called at the analysis stage to look for opportunities to reuse local materials. Whether it be spoil for creating new landscapes as was the case for Northala Fields in London, or concrete from large construction projects, or wood from local industries to build and finish new homes. Increasingly the availability of such opportunities may drive material choices and therefore design.

The notion of embedding flexibility comes into sharp focus for urban extensions or new towns. Urban designers are best placed to establish urban structures which will stand the test of time, adapting to changes in movement modes, land uses and lifestyles. Illustrating to clients the optimum block dimensions to support future flexibility can have a valuable impact, as was the case in the recent masterplan for Northstowe town centre.

An important role for any masterplan is to set the attitude to the physical fabric of a place. If our masterplan visions were underpinned by a strong sense of thriftiness, not just for the sake of viability but for a wider environmental objective, we might be less pressured by clients to have bold and glossy vision images and rather more home-spun, pragmatic and innovative diagrams that show how each piece in the masterplan has not just been informed, but made, by its context. Through a circular economy filter, the future solutions for big box sites might not be to demolish and replace them with fine-grained higher density housing. Instead we might find ingenious ways to reuse these large floorplates, or at least break them down and refashion them into manageable pieces.

In the near future, urban designers will need to be equipped with a real understanding of how the built fabric can be re-used or upcycled. We will need to advise on the interchangeability between uses and the parameters involved; we’ll be able to look at any building footprint and mass, and immediately assess the spectrum of uses it could potentially hold in the future. We will recognise and advise on the value of everything already existing, street patterns, buildings or pavement slabs. We will need to be undaunted by big hunks like shopping malls, but at the same time we will have stronger arguments to support the maintenance of fine-grained urban structures. It’s an exciting time, when our skills can make us part of the change coming. 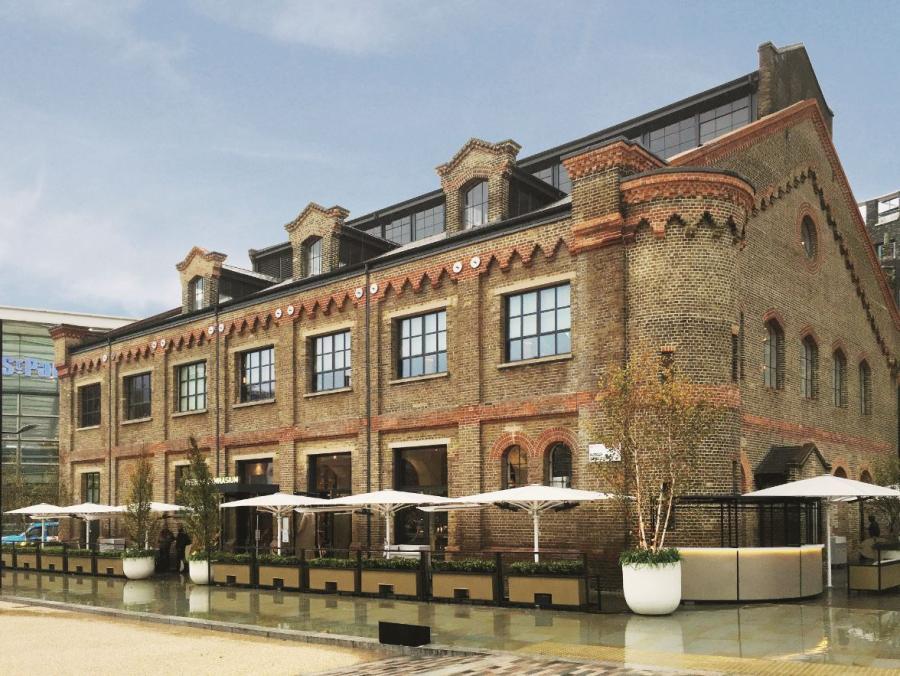 London King’s Cross, the German Gymnasium restaurant has given new life to a former boxing gym.
Source: Allies and Morrison 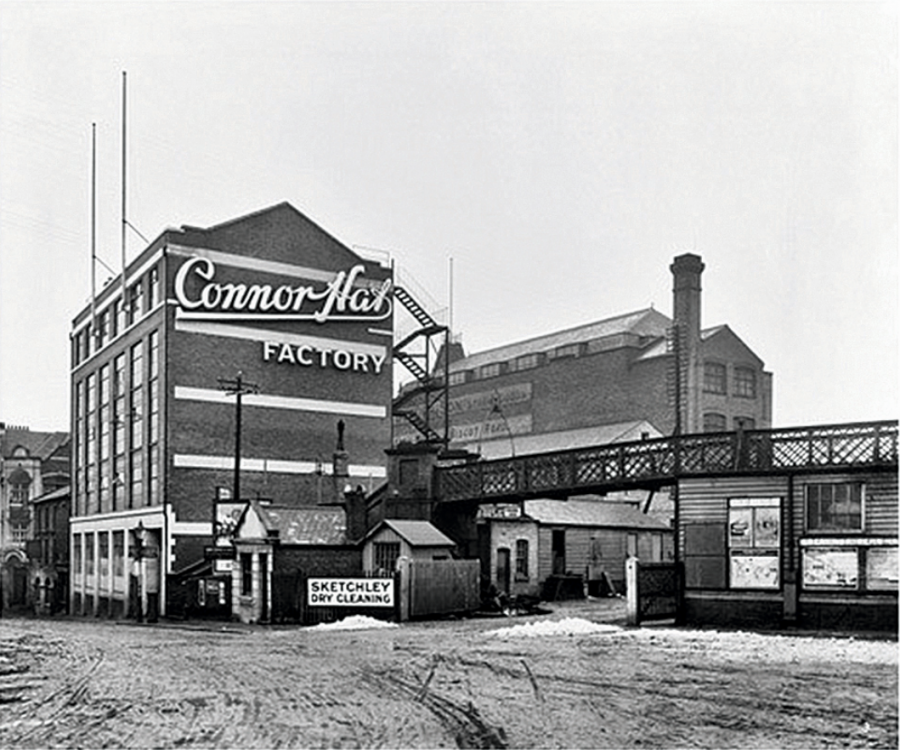 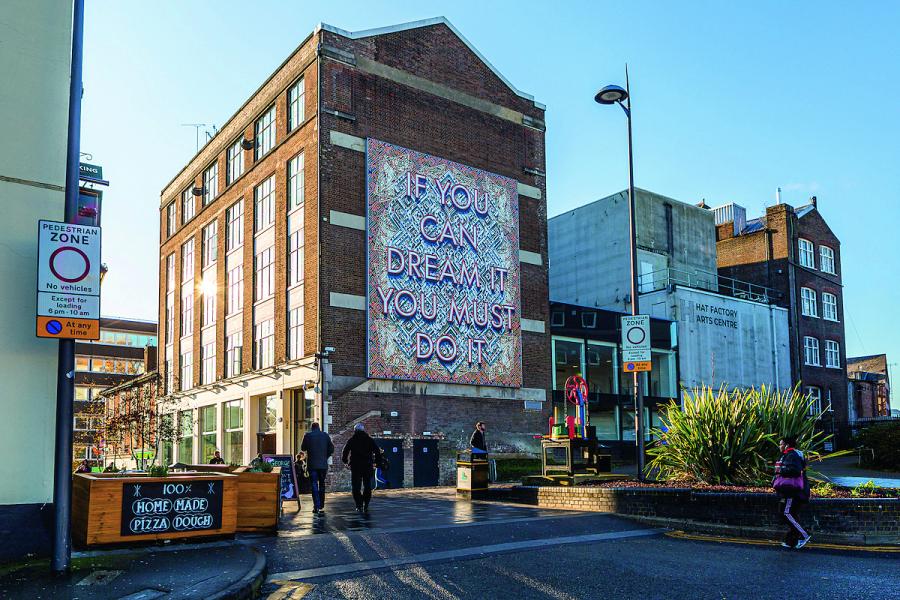 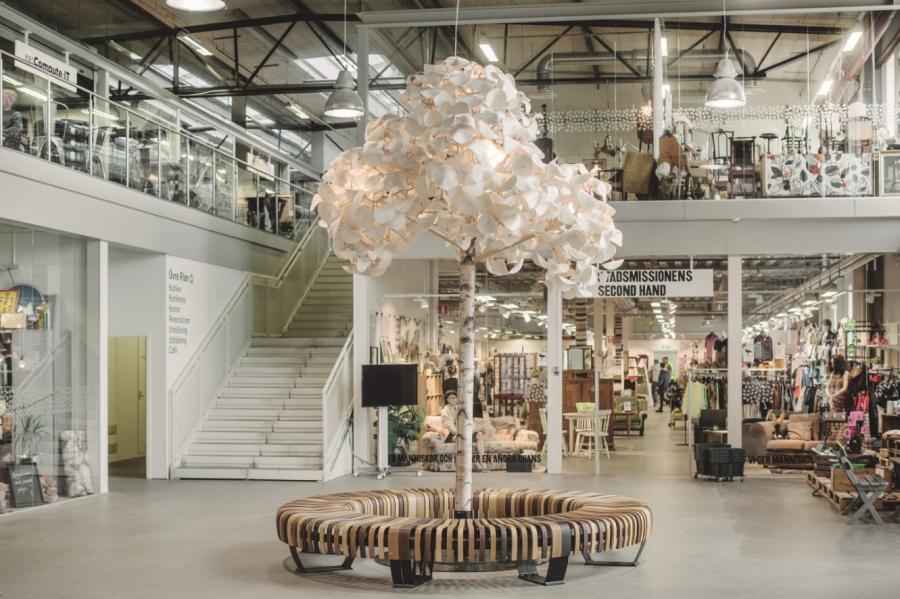 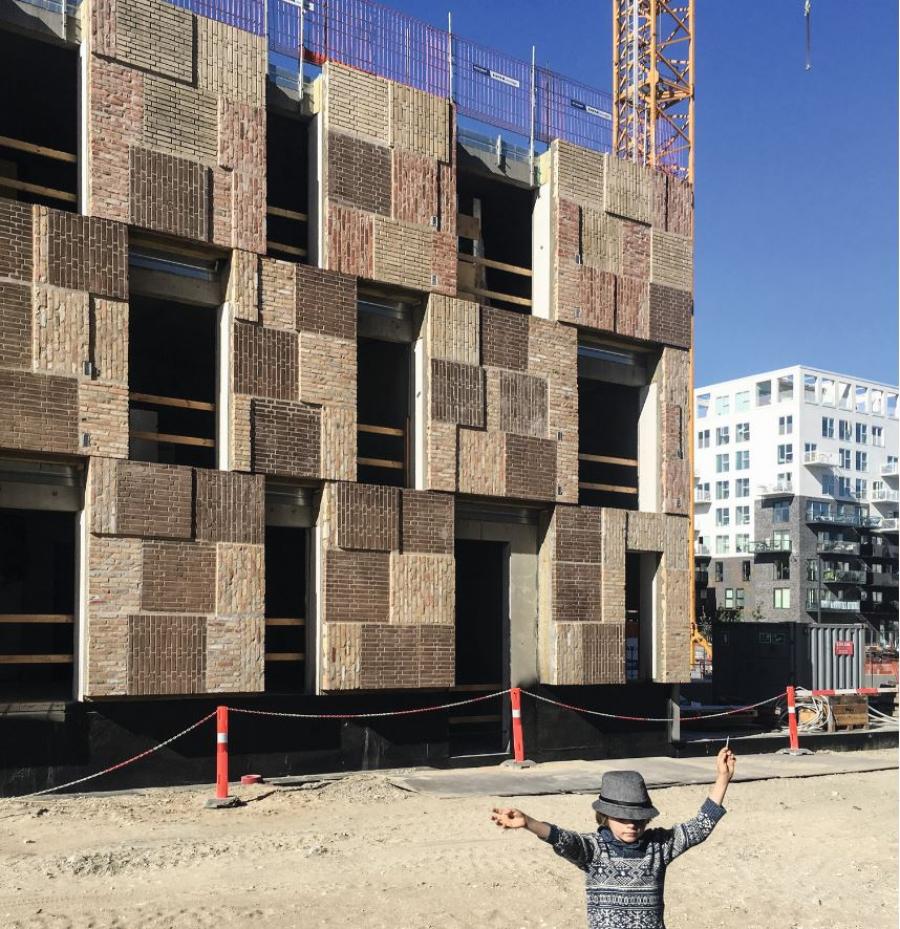 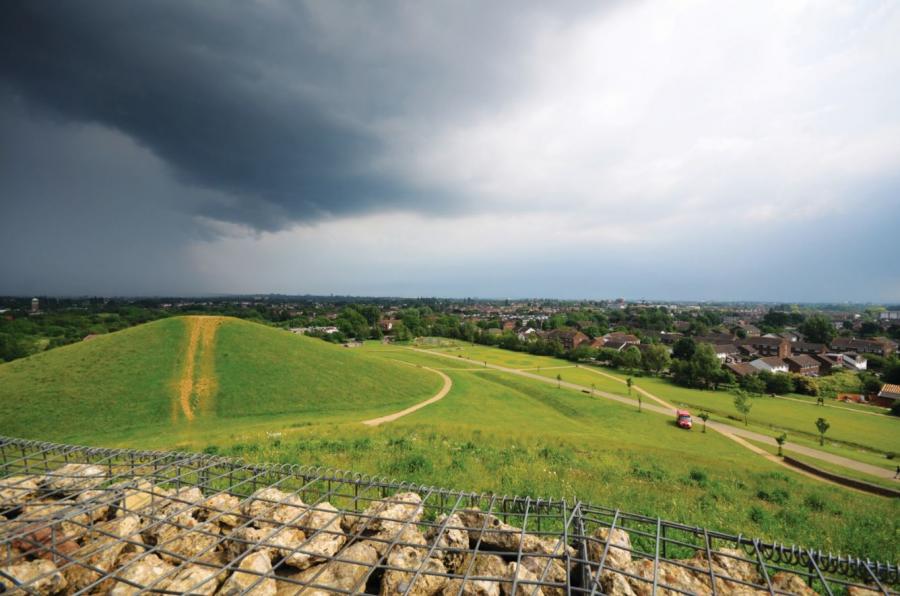 London, the large landscaped mounds of Northala Fields were created using the spoil from the construction of the nearby Wembley Stadium