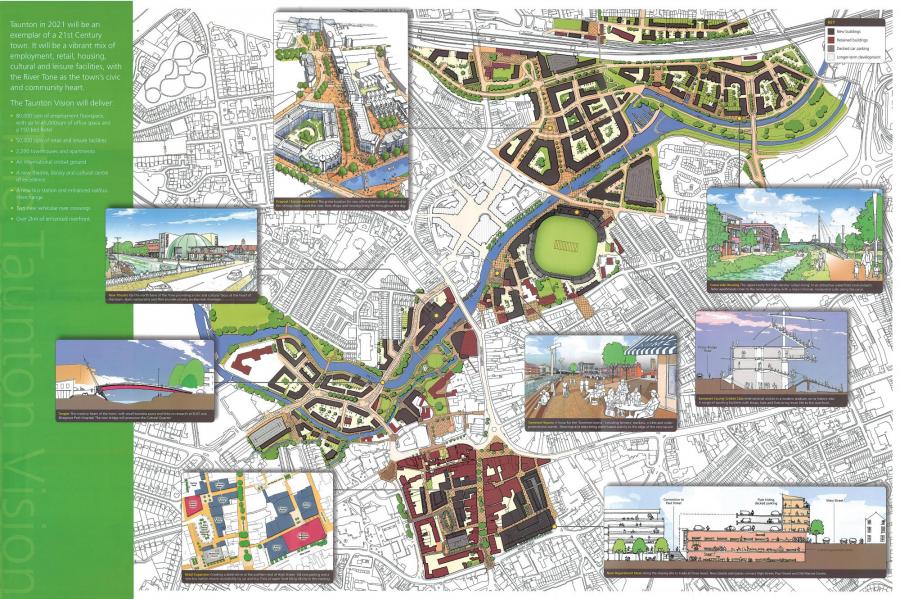 My favourite plan sets out a vision for how the town centre of Taunton could expand from the retail high street in the south to connect with the railway station in the north.

The vision was developed in partnership with the District and County Councils, Environment Agency, the Regional Development Agency and many local stakeholders. I was the urban designer in the team of consultants which produced the vision documents, running into hundreds of pages and covering a range of issues. The challenge was to summarise the vision in a memorable way, easily accessible, focussing on key principles and the potential for change.

We chose a double sided A1 plan (one side is shown here). Orange and salmon colours were used for the network of streets and spaces highlighting the importance of public realm and connectivity. This contrasts with the blue and green of the River Tone corridor to emphasise the idea that the river should become the heart of the town.

A hand-drawn cartoon layout gives enough detail to indicate the level of thought and proving put into the plan, without the impression of ‘fix’ that CAD might infer. A selection of 3D views and sections are arranged around the plan to draw out character and particular features.

The reverse side can be downloaded from the website www.newmasterplanning. com under ‘strategic projects’. It sets out the thinking behind the plan, the principles and approach to delivery. The bit I like most is the way that the plan folds up into an easily portable A4 square. When open, each key message occupies one of the six squares.

Despite the downturn in 2008, the plan has helped to deliver new river crossings and link streets to improve pedestrian priority in the town centre, new squares, enhanced parks and gardens along the river and major flood alleviation. Crucially, it convinced Somerset Cricket Club not to move out next to the motorway but to stay and become part of the town centre, with new mixed uses and housing overlooking the river and into the ground.

Twelve months of engagement in 2004 and the quality of the ideas generated means the plan is still robust today. The proposed block structure is flexible to accommodate a range of uses, even where the plan intended large scale offices near the station.

It is unfortunate that the decision-makers changed due to reorganisation and public sector funding cuts. This, combined with a reliance on large corporate development partners who reduce risk and listen only to the market, has resulted in the depreciation of the vision. For example, public money was used to turn a small surface car park next to the museum into a square of little regeneration value. In terms of priority, maybe the investment should have gone into opening up the strong pedestrian desire line from the station to the river, to encourage key sites to come forward earlier.

Summarising a vision onto one fold-out plan forces you to think hard about the clarity of your messages. Not only do ideas and strategies have to be strong, but a successful plan combines punchy graphic design and the ability to be used in marketing and delivery. But ultimately it’s the continuity of the people involved and the process that deliver the plan. 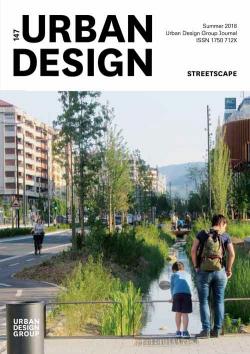 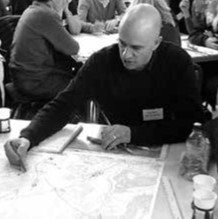 Specialisations
No boundaries…..I just enjoy all aspects of urban design

Ambitions
As a trustee of The Poole Communities Trust, I look forward to delivering much needed community centres in deprived areas of our town