So much of urban design practice involves defining the nature of new or redesigned streets and public spaces, and the different types of movement that pass through them. During much of the 20th century the focus was on motor vehicles. Guidance was issued in a series of influential but now out-of-date publications including Design and Layout of Roads in Built-up Areas (1946), Roads in Urban Areas (1966), and the initial Design Bulletin 32 Residential Roads and Footpaths, Layout Considerations published in 1977.

These publications were withdrawn in 2007 when the Department for Transport published Manual for Streets, marking a people-first focus for street and public space design.

Although many highway authorities have updated their street design and adoption standards to reflect Manual for Streets, there are still local authorities which use standards based on the earlier documents, even though they are half a century old. Then, the challenge was the accommodation of the motor vehicle, today the challenges are very different, such as obesity, air pollution, climate change, and the promotion of equal opportunities. Updated planning policies, statutory climate change targets, and new statutory duties such as the Public Sector Equality Duty mean that the use of the older standards is not merely out-of-date, but unlawful.

This article compares current street design guidance, including Manual for Streets, with the withdrawn older street design guidance and standards to highlight where conflicts lie. At the centre of this shift in thinking is the use of science and evidence to inform practice, and the employment of balanced decision-making: taking into account a wide range of factors in each case, not just vehicle movement. In particular, statutory duties are to be balanced, one against the other. The duty under the Traffic Management Act to ‘secure the expeditious movement of traffic’ is not a duty that is superior to all other statutory duties, but one that must be considered alongside others, such as health, equalities, climate change and of course, the common law duty of care owed by councils to all highway users.

Objective 1: Have due regard to policies, statutory duties, and guidance

Street design standards must discharge statutory duties and take into consideration national and local high-level policies, including those addressed to local authorities, such as climate change, public health, air quality, the Public Sector Equality Duty and so on. Failure to do so may lead to challenge by judicial review, or referral to the Local Government Ombudsman.

Objective 2: Duty of care owed to all highway users

Councils have a duty of care to both careful and negligent highway users. They must have regard to the limited ability of children to judge the speed of oncoming vehicles. They also need to consider the relationship between vehicle speed and accident causation, and the severity of injury.

Manual for Streets contains a user hierarchy which is paralleled in the National Planning Policy Framework (2019) and National Design Guidance (2019). The Public Sector Equality Duty under the Equality Act 2010 places elderly and disabled people at the top of the hierarchy. It also covers women. It requires that their needs be given ‘due regard’, which under Common Law means a vigorous and open-minded inquiry before settling upon a course of action.

The quality of design and maintenance contributes greatly to people’s sense of personal security and overall well-being. Buildings and street designs should complement one another. For example, street widths and building heights can be adjusted to provide a sense of enclosure, streets can be aligned on landmarks, and feature buildings located at junctions.

Objective 5: Cater for all the functions of a street

Manual for Streets lists the functions of a street that must be balanced so that no one function overrules the other: Place; Movement; Access; Parking; together with Drainage, Utilities and Street Lighting.

Sustainable Drainage Systems (SuDS) can be incorporated within the highway or immediately next to it, and local authorities are under a de facto statutory duty to have development plans that require SuDS in new development. The need for SuDS depends in turn on the size of the area paved-over for parking and highways.

Trees and lighting should be designed together: lighting is important for personal security, and trees are important for climate change mitigation and adaption, and better mental well-being. Highway authorities have powers to plant trees within highways and carriageways. The Trees and Design Action Group are a good source of further guidance. Utilities include traditional utilities such as electricity, gas, water, sewerage, telephone and cable, and new services such as district heating and cooling pipes, recycled water, and underground waste management systems.

Create streets in the style of the high streets and main streets of traditional towns, which provide direct routes and make efficient use of land. Main streets should include buildings that face directly onto the street to create a more interesting and attractive environment, with much better surveillance and personal security. Frontage access to plots can also be provided; research undertaken for Manual for Streets found that very few accidents occurred at driveways, even on busy roads. Tree-lined boulevards can be an effective and attractive option for busy, yet civilised urban streets.

Younger children cannot judge oncoming traffic travelling at more than 20mph. Research published in TRL Report 661 – The Evidence-base for Manual for Streets shows that drivers adjust their speed according to the local environment, and that speed can be controlled by reducing forward visibility, and physical and optical narrowing including narrower carriageways, different surfacing materials, and on-street car parking.

The planning system itself has been updated since the publication of Manual for Streets. More recent publications and research such as Space to Park advise tailoring parking provision to the location of the development and the availability of alternatives to car use. Housing built in or close to town centres may need few or no car parking spaces.

5. Junctions - use a broader range within a 20mph environment

Help blind and elderly pedestrians by enabling them to cross between parallel kerbs. For added convenience and safety, raise the carriageway to the footway level across the entrance of a side street, or make a full raised speed-table at T junctions and crossroads.

Vehicle access to private property must not interrupt the footway. Ensure at least a minimum 900mm width is available at normal footway crossfalls. The cheapest and most satisfactory solution can be to form crossovers with ramped kerbs that allow the footway to continue uninterrupted.

Use the latest guidance, such as Local Transport Note 1/20 Cycle Infrastructure Design (2020). Standard 7.36m (24ft) wide carriageways should not be used.

Objectives: Priority for vehicles rather than people

The withdrawn guidance dating from the 1970s and earlier prioritised vehicle movement and vehicles of the largest size, including bin lorries and removal lorries. The guidance gave comprehensive information on vehicle dimensions, deceleration rates and reaction times, but no equivalent information on pedestrians, cyclists, children, elderly people, or disabled people, and their abilities and the risks that they run.

Layout
The withdrawn guidance creates areas of housing ringed and isolated by ‘distributor roads’. The indirect routes followed by the distributor roads increase travel distances, waste land, and hinder walking and cycling, deterring people from using more sustainable modes of travel. The guidance also stops development in the style of traditional towns. The layouts that result are car-based suburbs.

Distributor Roads
Distributor roads are advocated, designed to provide uninterrupted movement for vehicles. Buildings that front a distributor road and frontage access are prohibited. Connections can only be made with a road at the same or adjoining level in the road hierarchy. Problems include:

Low priority for pedestrians and cyclists
The withdrawn guidance places the needs of pedestrians after those of vehicle users, with little consideration given to cyclists or disabled people. Pedestrian routes are often indirect, with awkward crossings, poorly lit alleys and pedestrian tunnels, and inconvenient foot bridges. Pedestrian railings are used not to protect pedestrians from out-of-control traffic, but to stop people from crossing the carriageway.

Minimum parking standards that lead to suburban density and car dependency
The tradition of minimum parking standards requiring 2-3 parking spaces per house reduces housing densities to below 30 homes per hectare, making public transport unattractive and unviable. A properly conducted sustainability assessment today would condemn these standards. It is now recognised that parking provision should be tailored to each location.

Space-wasting roundabouts within urban areas
Roundabouts such as the ‘normal roundabout’ from Design Manual for Roads and Bridges take up large amounts of land, which in urban areas is at a premium, and present difficulties for cyclists and pedestrians (especially disabled people). Roundabouts account for around 20 per cent of all reported cyclists killed or seriously injured casualties, and roundabouts designed to standard UK geometry can be hazardous for cyclists. The Design Manual for Roads and Bridges is a design standard for motorways and highspeed trunk roads; it is not a standard for urban streets.

Crossroads banned outright or accepted only in exceptional circumstances
Some highway authorities continue to ban crossroads and insist on staggered junctions, yet crossroads are common in traditional towns and cities. They are convenient for pedestrians, minimise diversions from desire lines and make it easier to create permeable and legible street networks. Road safety can be ensured with traffic calming and 20mph speed limits.

Junctions with large corner-radii
Junctions with wide corner-radii force pedestrians to choose between a long crossing distance across the mouth of the junction, or a diversion to a point where the street is narrower and less risky. The wide-radii allow vehicles to make the turn faster, adding to the risk to pedestrians and cyclists.

Vehicle crossovers that interrupt the footway
This is a practice dating from the age of horse-drawn carriages, Today’s footways should be level and unbroken. 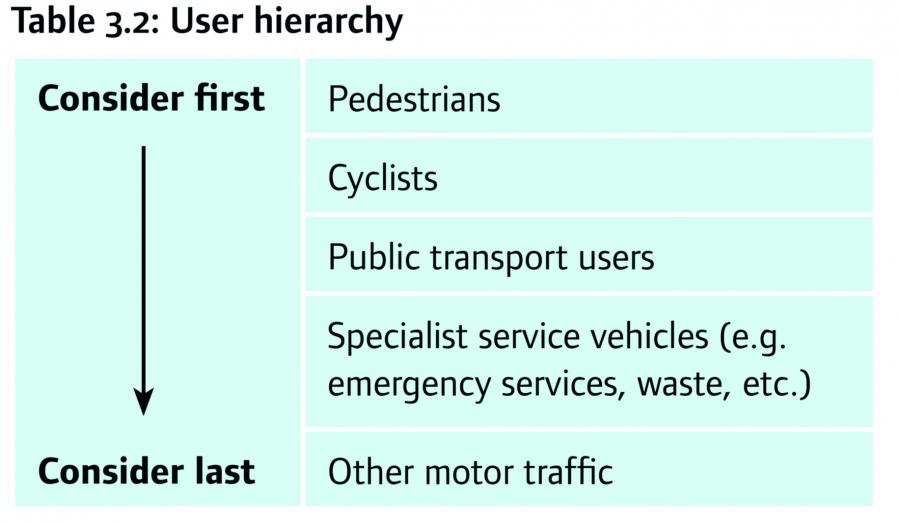 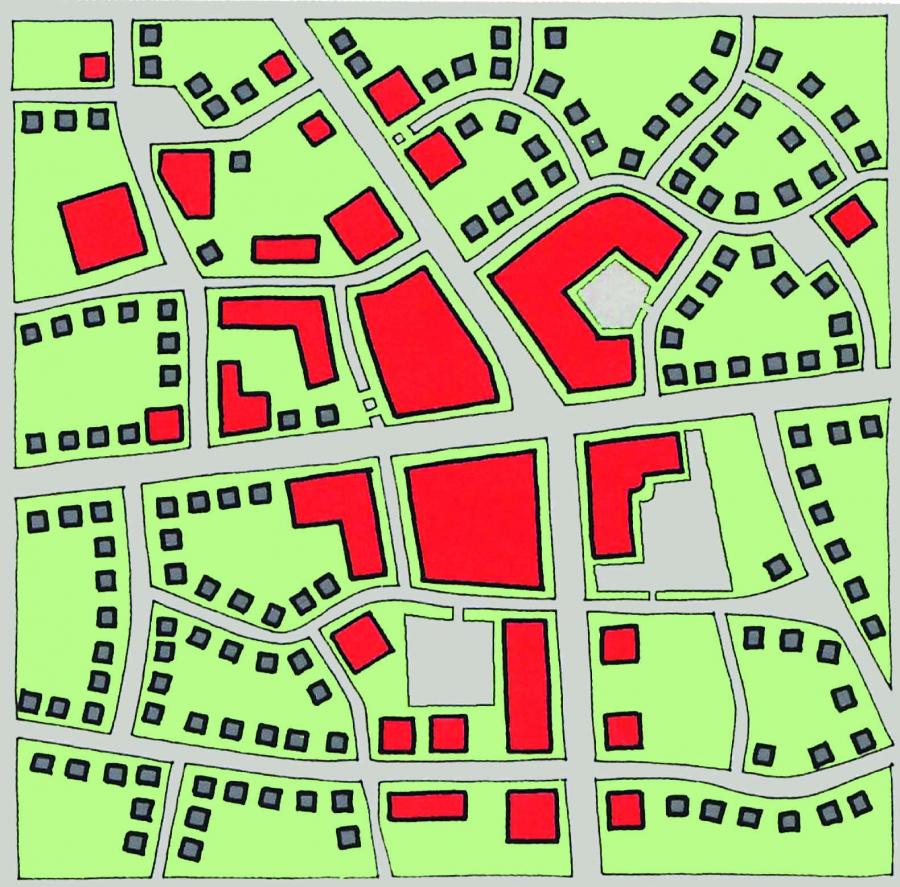 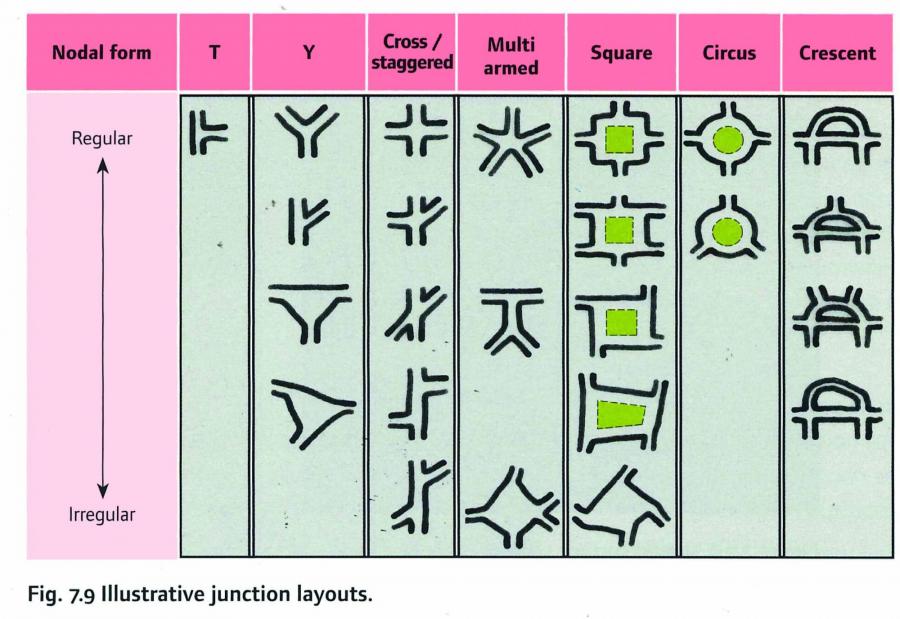 5. Junctions - use a broader range within a 20mph environment 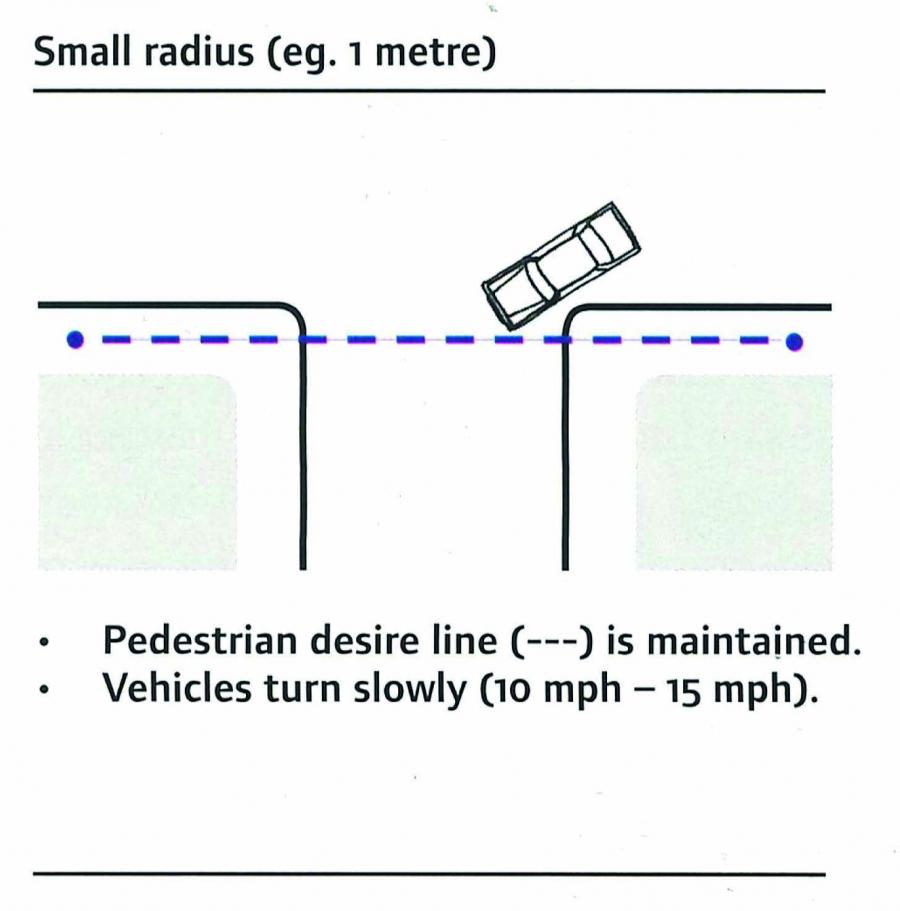 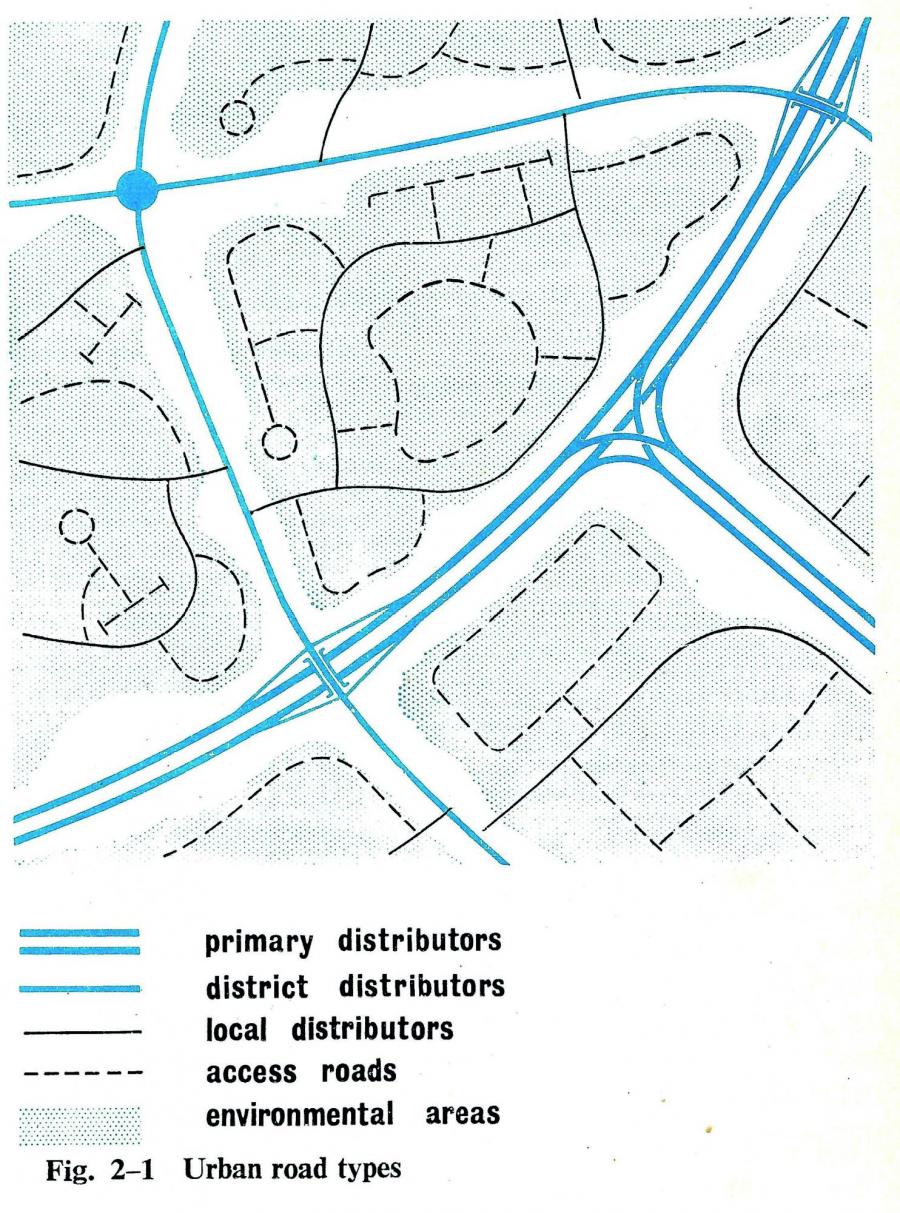 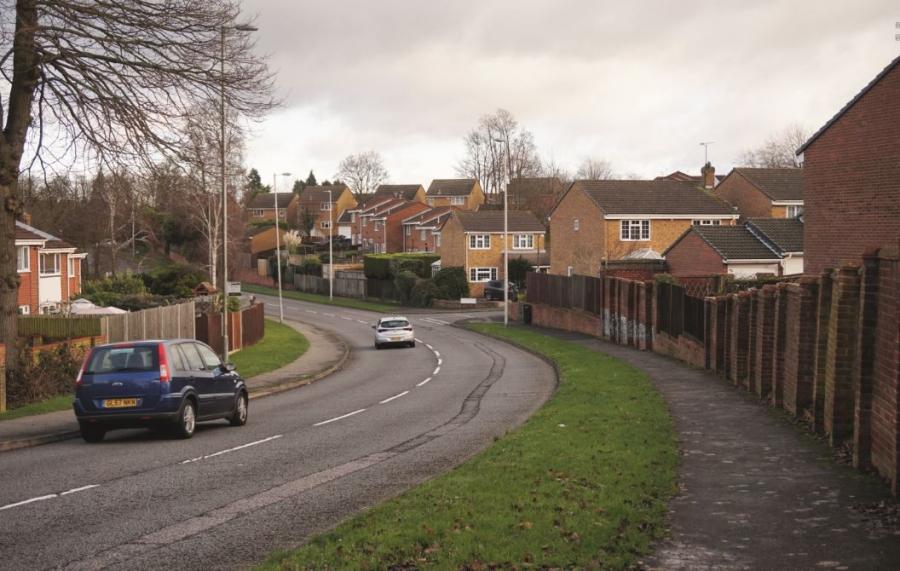 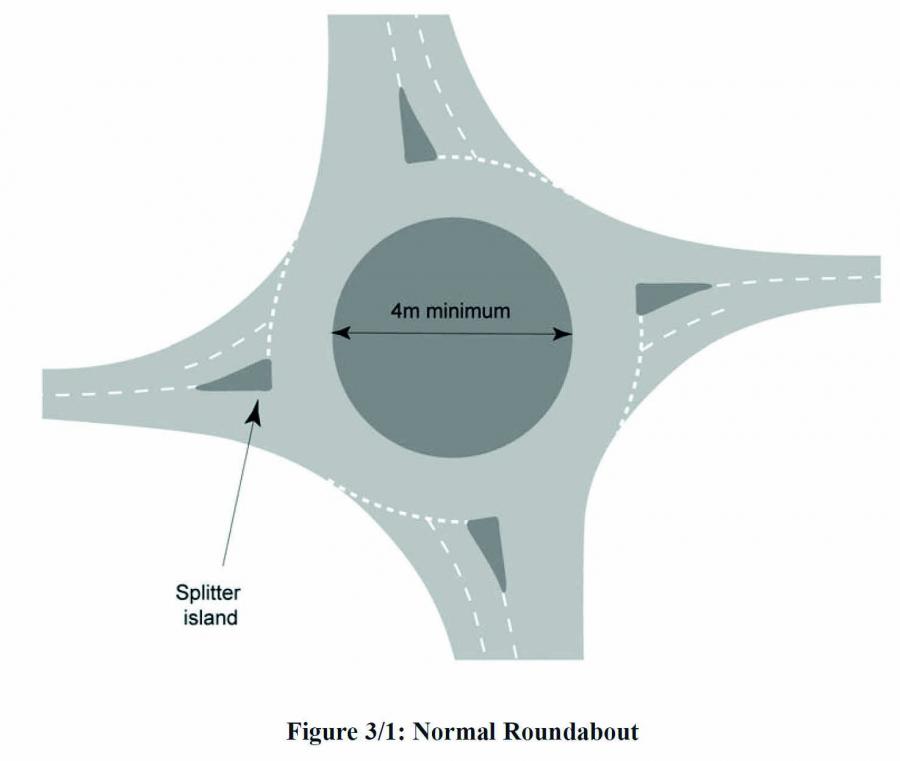 Robert Huxford, Director of the Urban Design Group, working with the Institution of Civil Engineers, in conjunction with the Public Realm Information and Advice Network (PRIAN), and the Trees and Design Action Group