More design goes into a pizza than a local plan? 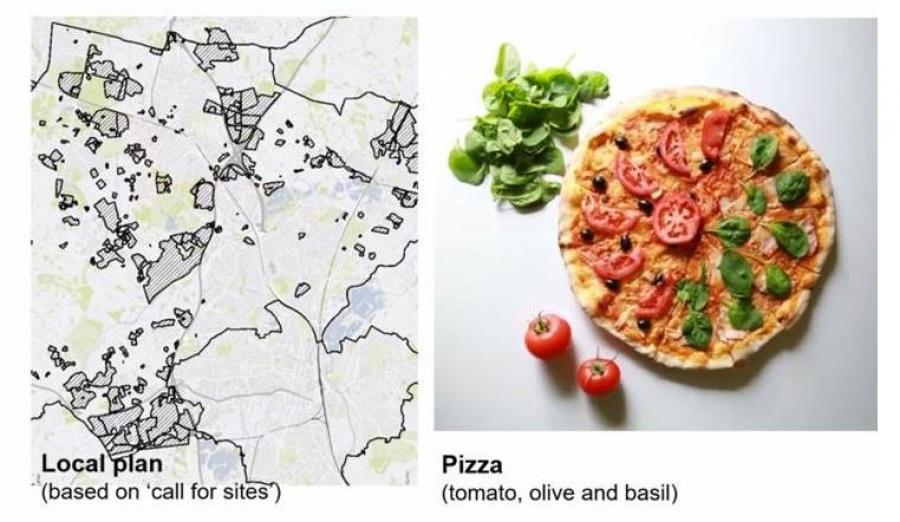 Nearly 200 people from engineering through to planning attended this event, the first of four lunchtime events addressing the Planning White Paper.

Wei Yang, incoming President of the Royal Town Planning Institute, spoke of the very long time over which planning must be considered: the long-term future, the future of future generations. Turning to climate and biodiversity, she commended the Wellbeing of Future Generations Act in Wales which was bringing about a changed mind-set. Everyone needs a decent home, access to greenspace, jobs and shops; it is a basic requirement, but it is not happening everywhere. The population is ageing and this needs to be planned for; children need to be given proper consideration: mental health problems develop early: around half develop by the age of 14, yet many children are denied the conditions that foster good mental health, including access to nature.  Climate action has been conducted on a sector by sector base, but planning can play an essential role in facilitating low-carbon lifestyles. The White paper proposes to place all land in one of three categories: more consideration is needed as to how this system will enable UN sustainable development goals, and other international commitments to be met.   Researchers at the university of Cambridge have estimated that to 7 million hectares of land (equivalent to the size of two large English Counties) need to be released to secure the provision of food, space and energy for the future population, as well as meeting environmental obligations. Soil and land are very valuable assets.  We need to take a much more integrated approach to delivery. The fundamental objective to create a balanced system for people, nature and society to exist in harmony. We need a strategic long-term urban and rural approach, addressing carbon emissions, transport, energy, nature, agriculture and biodiversity, and to consider the whole territory as an integrated entity.

Jenny Raggett, Transport for New Homes, started with a critique of the housing targets system. They are creating high housing targets for rural and semi-rural areas which are already being covered with car-based sprawl. The targets neglect to take into account the locations of jobs, services and amenities, or the right places to build for sustainable transport. We need look much more carefully at where to build, and how to build, rather than targets based on an algorithm. Turning to the White Paper she warned that transport had been left out: it is a basic mistake. Transport needs to be centre-stage in the planning system. Local authorities are not islands, yet cross-boundary ‘strategic’ planning is lacking. Transport, water, retail, ecology need strategic planning.  We need digital mapping to enable us to coordinate new homes and other development intelligently across a wide area, including along public transport corridors. The division of England into three zones: ‘growth’, ‘renewal’ and ‘protected’: was far too simplistic, she asserted. The proposal to bypass the ‘outline planning’ stage would means a lack of scrutiny at a critical point in the local planning process. There needs to be a better way of scrutinising and managing large housing projects to get the right results and follow-through with delivery. There is continued concern that the proposed Infrastructure Levy will go, as has happened with CIL, to fund major road construction in the countryside.   Local sustainability appraisal is to be scrapped in favour of a single central sustainability test. But what will that test be?  And so, she concluded, the White Paper leaves many vital areas vague: the new National Model Design Code, the revised National Planning Policy Framework, and the National Sustainability Test.

Lynda Addison, representing the Transport Planning Society, began her presentation with images of soulless car-based development. The TPS, CIHT and RTPI had collaborated in producing a report published in 2019, Better Planning, Better Transport, Better Places. Plan for people and you get people, plan for cars and you get cars, the report warned. She cited work by Professor Peter jones which offered three models of city planning:

Will it deliver sustainable and accessible locations? Is it too crude and simplified a system to reflect the complex needs? How will the Government ensure sustainable transport provision built into the local plan and every development? Will the national infrastructure levy support strategic elements of the sustainable transport network and what happens about local requirements?

Developing an area the size of Surrey in the next 10 years?

Roger Evans spoke of the need for a strategic urban design approach to planning. There was a predicted requirement for 300,000 houses per year for the next 10 years. Based on current volume-housebuilders’ densities, this would require 90 square miles of land - an area equivalent to the size of Surrey. Would the delivery of these houses produce good urban form?

The current planning system starts with an invitation to developers and landowners to submit sites for development. The next stage is to consult on these submissions. The responses received are largely from consultants representing landowners. There is little engagement with local communities. The effect of this way of planning is to produce a scatter of sites, that are poorly connected, and are often on the borders of political boundaries. The result is a mere spreadsheet exercise: a listing of the sites, their size, and when they will be built out. There is more design intellect applied in the creation of a pizza than a local plan.

Roger offered a worked example of what the current planning system does to an existing market town. There is a call for sites, sites are brought forward and the usual scatter selected, leading to segregated land uses and isolated development. Around the town, new development appears as cells, served by secondary streets, rather than an extension of the primary street network. This leads to inverted development. Instead of the edges of the development being against the main arterial routes they are inside the development cell, with pseudo centres that are hard to develop or to achieve mixed use. Then there are the wholly disconnected sites in open countryside at a distance.

Existing streets are largely ignored under this system. Roger gave the example of Bicester, where a 6-8 lane highway has been created close to the centre of the town, where, by using a strategic urban design approach, an attractive urban quarter designed for people could have been created.

So what might be an alternative approach? If there were a strategic urban design input into local plans that would lead to a very different solution. For the same market town example, one would see a street-based urbanism where primary frontages address the extended street network, where there are flexible land uses and money that would ordinarily go into major road construction and large roundabouts, would instead be invested in a transformed public realm.

An urban form assessment must inform the local plan. This should be in the very first stage of the local plan process. It should be a design driven exercise matching the spreadsheet exercise.  Inputs into this would include development economics as well as inputs from engineers and ecologists. The essence of urban design is to continually look up and down the scales: from the sub region to the town scale, to the massing scale, to the place and then detail of place and thinking. The local plan system at present implicitly assumes that having allocated land for development, we can consider design once the application comes in. This is far too late.

Roger advised us to be aware of two concepts: natural capital, and urban capital: our stock of city and town form for future generations and how to foster these. The purpose of introducing strategic urban design into the local plan is to maximise urban capital.

The first stage of the local plan process should cover urban character assessments; urban design options should then be set out as alternate visions and then a vision agreed with the community. This process will run alongside the spreadsheet exercise. In this way we can rebalance planning so that instead of having sites allocated and the anonymous housing estates that follow, we can actually build pieces of town and city quarters.

There are three concerns: firstly the resources of local authorities, the time frame available in which to do it, and finally the willingness and enthusiasm of the local authorities to seize the opportunity.

Robert Huxford is director of the Urban Design Group, and co-founder of PRIAN, the Public Realm Information and Advice Network, and a member of the Institution of Civil Engineers Municipal Expert Panel.