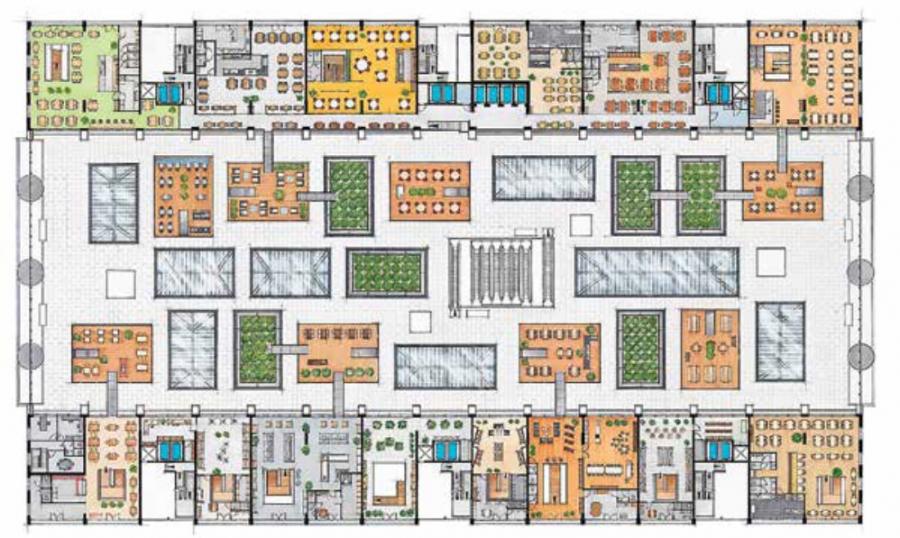 This plan is a representation of a system of spaces that form a leisure and retail environment conceived as a public square within a building. However, this is more than a building and a space; it is a careful interplay where the lines that divide building from space are not drawn in the usual way, and this plan is a condensed representation of this characteristic of the project.

The building includes apartments on the upper levels and mixed uses on lower levels. These are depicted in the plan by the cellular units along the top and bottom of the plan. These units define the central public space, which is enclosed by glass screens at either end, allowing visual connections to the outside.

The plan provides a useful reminder of how we consider public and private space, and how we can consider architecture and landscape as a single interconnected system. The compartmentalised nature of design disciplines and their orthodox outputs (drawings, models etc.) can create missed opportunities for intelligent and creative ways to view public and private space, and how they can interplay. This plan cleverly communicates the public and private interior spaces together. I consider it an evolution of the principles of the Nolli Plan of Rome, in which the interiors of public buildings such as churches are illustrated as public space amongst the otherwise closed figure-ground forms of the private buildings.

This plan also uses playful illustration to indicate the life of the spaces. The interior spaces of the shops, restaurants and bars are illustrated similarly to those of the public square. This approach demonstrates a specific intent to communicate the building as an inviting and open plan that seeks to bring together the various uses and elements of the project as a single experience. The plan is also very detailed, with individual plants and furniture layouts giving a clear intent for the role of the spaces, and engendering them with a more intimate character.

The plan also animates and hints at the role that this first-floor level plays as part of a wider system of vertically layered spaces. The roof spaces over the ground level stalls are illustrated as gardens and zones connected by bridges and stairways.

Clearly the building and space represented satisfy a very particular set of urban conditions. However, it serves as a useful reminder for practitioners to think carefully about how their drawings can be composed to communicate different messages. By drawing the interior plans in partnership with the public spaces as a single system, the experience for users becomes more real in the plan. This needs not be forced though. We cannot pretend that the vaults of a bank can be illustrated as part of the same experience as the public square outside. However, we can carefully consider the community centre and village green as a single system for community activity, part of which happens to be a building, part of which happens to be a landscape.

There are so many ways in which a plan can tell a story; we need to carefully consider which story we want to tell. I think the plan of Markthal is an intriguing window into a project which looks at space, building and plan programme in a manner that we are not used to seeing. 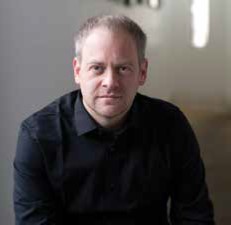 Experience
At IDP over the past 20 years, affordable housing and student accommodation architecture projects, and visions and the delivery of large scale masterplans and urban regeneration projects, combining urban design, architecture and landscape design.