The organisers of the Tour de France chose to delay the start of this year’s final stage into Paris, to ensure that the race ended shortly before sunset. So an always dramatic, climactic event was made even more theatrical. As the peloton tore nine times up and down the pavé of the Avenue des Champs-Elysées, the setting sun poured through the Arc de Triomphe and down the avenue, and the monument became a dark silhouette against a blaze the colour of the winner’s maillot jaune.

The final stage is largely ceremonial, the winner having been decided on the previous day. The first part of this stage is a slow procession, as the riders move from the countryside towards the city. It is a short stage, so this countryside is hardly la France profonde, but nonetheless the transition from pastoral to metropolitan is striking and very symbolic. The helicopter camera sees the Eiffel Tower on the horizon before the riders do, but when it becomes visible from road level, the roads become Parisian streets enclosed by urban buildings, and the riders cross the Seine, knowing that 21 days of pain and suffering will shortly be over. Their destination is within sight; the capital receives them.

The world’s greatest sporting event is also an enormous piece of street theatre. As it passes through countless villages, towns and cities on its circuit of the country, an estimated 12 million people line the route, enjoying the spectacle for free. Each village high street, as well as the Champs-Elysées and the Rue de Rivoli, is public space temporarily repurposed for the competitive display of native heroes, Pinot, Bardet and Alaphilippe versus the rest. The street becomes a stadium. The Tour is not unique in this respect – every local kermesse in a small Flemish town is similar – but it is on the biggest scale.

Architecture forms part of the physical setting for the contest. French TV assiduously picks out and identifies every parish church and chateau that the race passes, and provides a potted history of each one for the TV commentators to knowledgeably pass on. The formal and monumental urban design of Paris is annually celebrated and memorialised, as the peloton passes the Panthéon, the Louvre (this year actually riding through the courtyard and around the Pyramide), and repeatedly, the Luxor Obelisk and the Arc de Triomphe. The exception this year was the Cathédrale de NotreDame. Although the race passed close to the burnt cathedral, French TV chose to exclude any view of it. Perhaps this was from a sense of propriety on a great national day, just as the cameras do not dwell too much on a rider sprawled on the tarmac, in agony from a broken collar-bone.

The street theatre of the final stage has its own protocol, unwritten but unfailingly observed. The wearers of the four leaders’ jerseys (yellow, green, white, polka-dot) start at the front, and no-one overtakes them until they choose to give way. The winning team rides in a line abreast, and sitting upright drinking champagne. Friendly conversations take place between riders of competing teams, only on this stage. A celebrated rider appearing in his last Tour takes a solo turn at the front. Eventually entering the first circuit of the Champs-Elysées, the winning team takes the applause, riding at the front of the peloton. Only then does the race for the line really begin. Observing all this is a matter of honour; the spectators expect it and appreciate it.

The geography of urban streets, with bumpy pavé, steep climbs and descents, and sharply-angled corners, as well as that of country roads and Alpine mountains, makes this theatrical spectacle possible. It is not what urban streets were designed for. But the same immediacy, the same close juxtaposition of public space and private space that make for people-friendly towns, also enable this great public event. Add to this a national sense of the importance of French culture and history, of being in fact a top nation, and you have a unique sporting demonstration of physical and social geography. What a pity that the French have not managed to win the race since 1985! 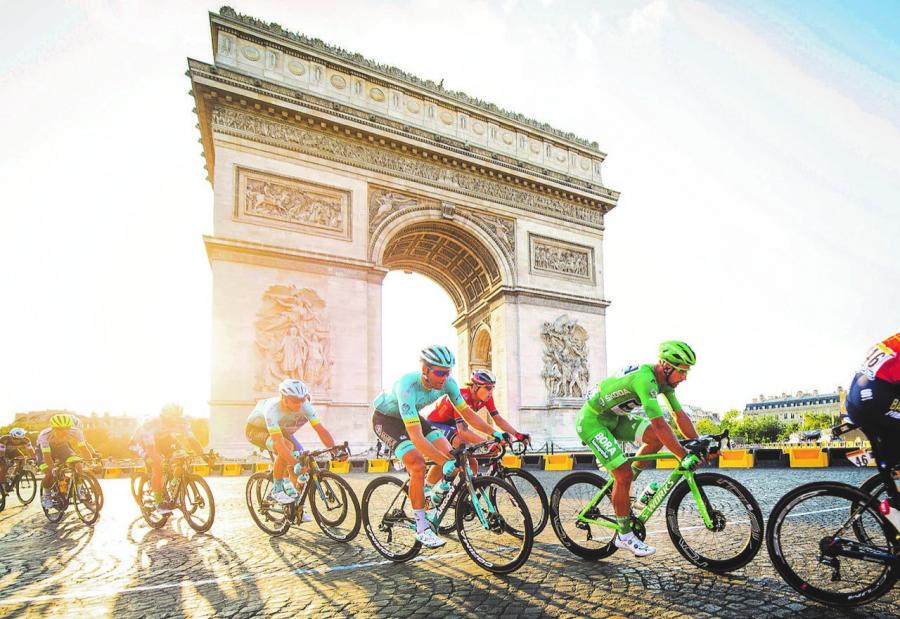 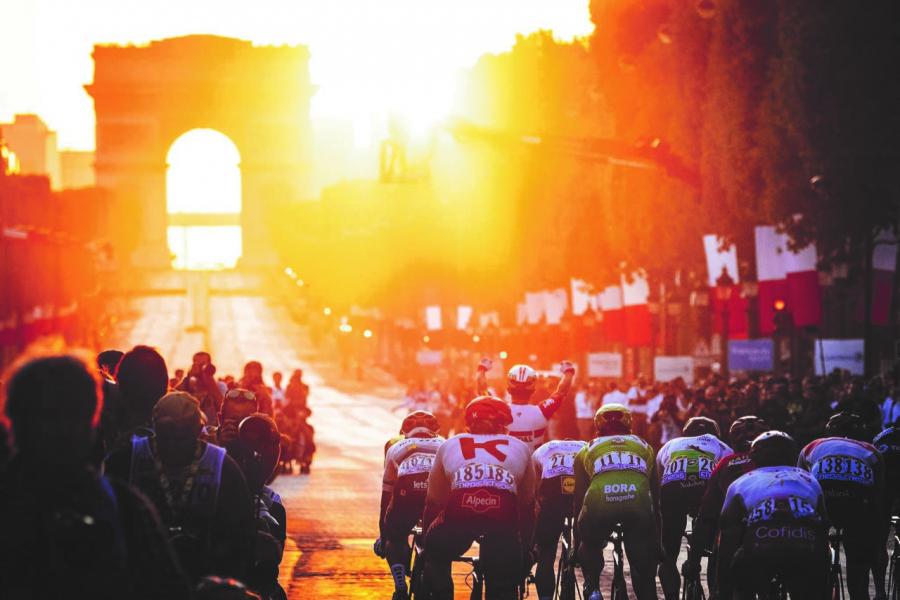