I referred in the last Endpiece to Jane Jacobs’ ideas about urban diversity, and I am drawn back to the subject again. Ever since reading Death and Life for the first time, in the final year of my architecture course, I have accepted as an axiom of urban design Jacobs’ argument that cities manufacture diversity, and that a big urban concentration of people is necessary in order to create a diverse and rich range of activities and facilities. I experienced a small doubt about this when I passed a rocking horse manufacturer located in a tiny village in Shropshire. On the internet I see that, while rare, it is not unique; there are other rocking horse manufacturers, but none of them seems to be in a city.

But a recent visit to Orkney has caused me more serious doubts. Orkney has 20 inhabited islands, located remotely even from the far north of the Scottish mainland, and a population of 22,000. That is the same population as Godalming or Kenilworth. Yet Orkney has three gin distilleries, two breweries, two whisky distilleries, annual international science and arts festivals and an annual blues festival, seven airports, several museums, a weekly newspaper, and generates more than 100 per cent of its energy consumption from renewables. It also makes very good cheese and oatcakes, among other things. As I write this, I have just eaten an excellent shortbread from the Westray Bakehouse (established 1892) on the island of Westray (population 588).

Orkney does all of this and more without being a big and populous metropolis. It has only two small towns. It does all of this in fact precisely because it is small, isolated and dispersed, and therefore needs to generate its own diversity in order to sustain a good standard of living for its small population. Its historic isolation has also helped to create a distinctive independent Orcadian culture, which has shaped its autonomous diversity. I don’t know details of Orkney’s economy, and you may object that its residents could not enjoy what they do without subsidies from Holyrood and a disproportionate amount of local democracy. In Birmingham I enjoy free bus transport, but if I were an Orkney resident, I would enjoy free ferry trips and plane journeys as well (not an unlimited number, but considerable). Nonetheless I think there is a lesson here that makes me question my orthodox reading of both Jane Jacobs’ chapter on diversity and her later book The Economy of Cities. I wish she were here to explain how it works. Clearly not every settlement of 22,000 people can do what Orkney does. For one thing, many of them are dependent on a nearby city for a lot of their facilities. They do not have the needs which isolation presents. But I find Orkney an inspiring place, and a challenge to my long-held assumptions.

Incidentally, Stromness, the smaller of Orkney’s two towns, has one of the most astonishing examples of a shared-space redesign of a main street that I have encountered. The quayside town is strung out along the A965, the main street, which has six different names along its 1.5km length. A dense row of buildings, their gable ends towards the quays, separates the street from the water. Heading for the campsite at the far end of town at Point of Ness, I drove around a right angle onto the street and immediately thought ‘this isn’t right, I shouldn’t be here’. It is a narrow two-way street, in places only one vehicle’s width between the buildings, and it proceeds through several sharp angles as it passes through the town. It is uniformly paved wall-to-wall with big stone flags, with an irregular band of granite setts running down the middle. I don’t remember there being a single traffic sign or a column of any description along its entire length.

Nervously I continued to drive slowly in second gear, cautiously passing pedestrians. If the design intention is to make drivers uncomfortably aware of the danger they pose to other occupants of the space, it works. In the four days we spent in Stromness, I chose not to drive along it again, but bypassed it higher up the hill. But my partner Polly and I walked along it several times, feeling, as pedestrians, in charge of the space. It’s a most enjoyable street. 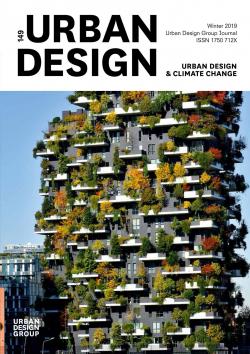 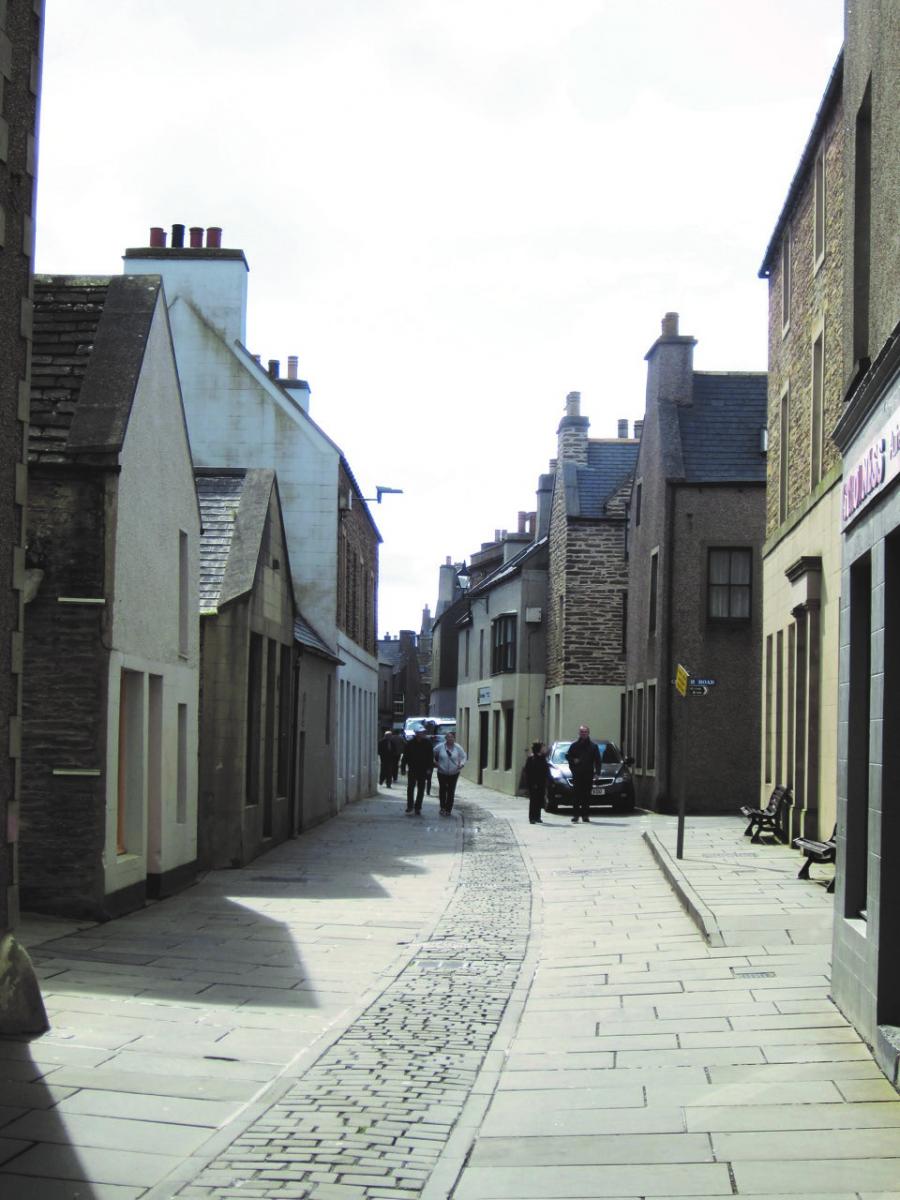 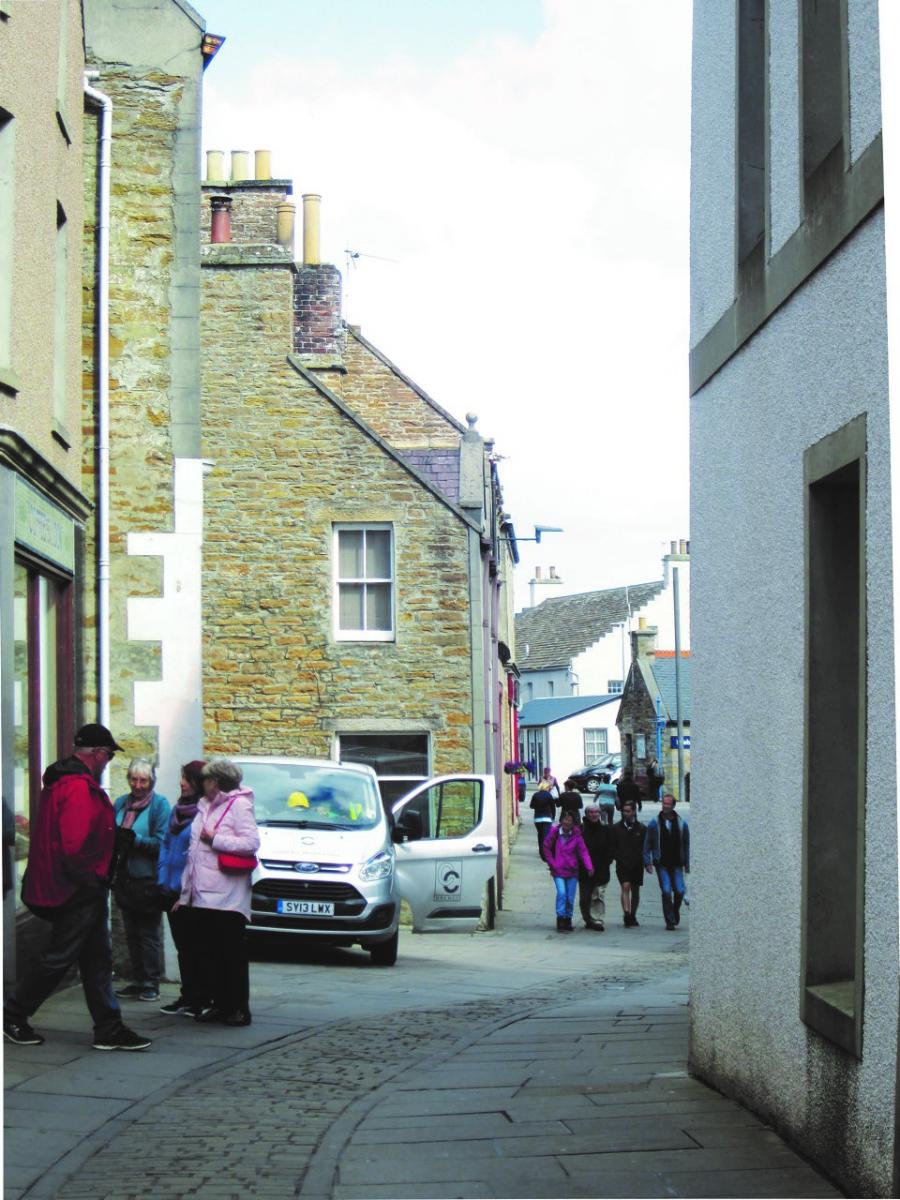 Two views of the A965 in Stromness, paved with stone flags and granite setts