(This was written in June. Circumstances may have changed by the time you read it).

As many others have observed, even the appalling event of the COVID-19 pandemic, which has killed over 40,000 people in the UK and inflicted huge damage on the economy, has brought about some beneficial consequences. With a big reduction in vehicular traffic, towns and cities are quieter, birdsong can be heard, and the air is cleaner. While other retail businesses are suffering, bike shops have never been busier. Many have been speculating on whether these benefits are likely to survive in the longer term, or whether we shall eventually return to ‘normal’, however dreadful in many ways that normal was.

One aspect of normality, whose return will however be welcomed, will be to no longer have to keep our distance from other people: so-called ‘social distancing’, which I obstinately insist on calling physical distancing, requires physical space. But it seems that physical distancing may have to continue for some time yet, even while shops, pubs and other places reopen. Another collateral benefit of the pandemic is in response to this, and to the decline in usage of public transport and the increase in cycling. It was the publication in May of statutory guidance from the Department of Transport to local authorities, on the reallocation of road space to pedestrians and cyclists.

The Secretary of State describes this reallocation as a ‘once in a generation opportunity to deliver a lasting transformational change’. The widening of pavements and the insertion of cycling lanes is not a temporary measure just for the duration of the pandemic: while catalysed by the crisis, it is intended to be a permanent and radical shift in the distribution of urban space.

The new policy has appeared as an unexpected intervention in an argument that has been running in Balsall Heath since last October, and which I mentioned in the last Endpiece. The metropolitan transport authority, Transport for West Midlands (TfWM), in conjunction with Birmingham City Council proposed changes to 3km of the A435 radial road, to enable the better operation of the No.50 bus, one of the most frequent and heavily-used bus routes in the region. The biggest physical change was proposed for Moseley Road in the neighbourhood centre of Balsall Heath. Here a northbound bus lane was proposed, necessitating the widening of the road, therefore the narrowing of the pavements on either side. This in turn necessitated the felling of 100-year-old trees which stand at the edge of the pavement.

TfWM claimed that these works would implement policy BH10 of the Neighbourhood Plan, which proposes the improvement of the public realm and street scene in this neighbourhood centre. But it was met by considerable local opposition, which argued that a reduction in the amount of pedestrian space and the removal of mature trees cannot be described as improvement. A revised scheme sought to mollify the critics by adding other measures, including a better quality of pavement surface, and new street trees planted elsewhere. But the intention to proceed with the proposal seemed not to be deflected. It appeared to be heading towards a recommendation to the cabinet member for transport and environment for his approval; we assumed that he would give it and then, due to opposition by local ward councillors, it would proceed to a review by the scrutiny committee.

Then Coronavirus appeared over the horizon, and with it the new government rules about physical distancing, and then Grant Shapps’ statutory guidance. In this changed context, the TfWM scheme suddenly appeared to be heading in the wrong direction: we need wider pavements, not narrower pavements. We have argued all along that the main impediment to buses’ efficient movement during rush hours is the number of illegally parked cars. It has been noted that during the lockdown, the decrease in car usage has enabled buses to save more minutes of journey time than the bus lane scheme was intended to achieve. Anyway, I recently had an email from the metropolitan mayor, in reply to one about the statutory guidance, telling me that the TfWM scheme has now been paused, and that it will be subject to a review. I suspect, and hope, that we shan’t be seeing it again. It’s an ill wind etc… 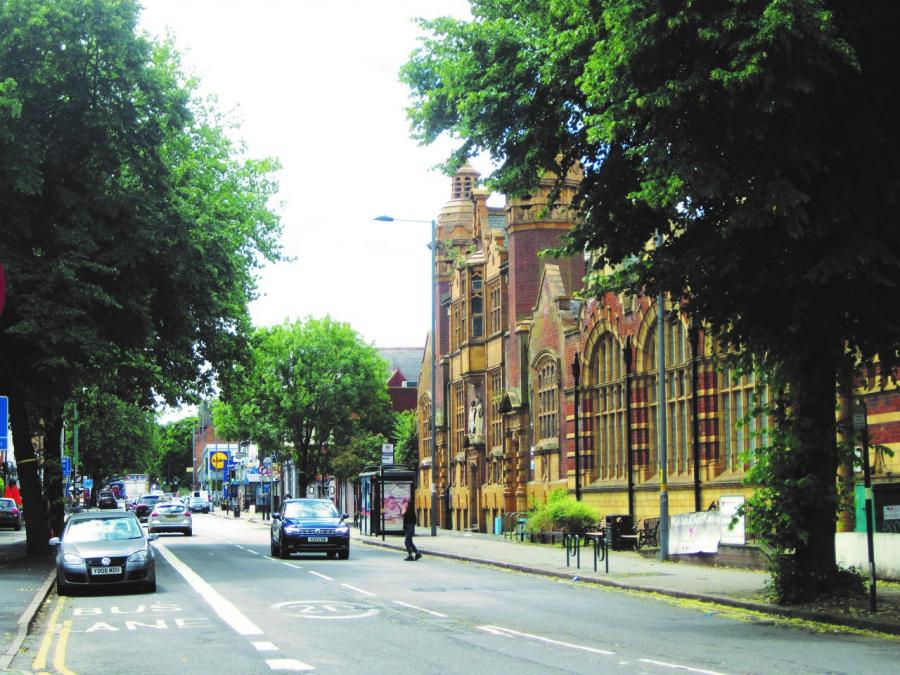 Mosley Road, Birmingham with the 100-year-old trees at the edge of the pavement