Exhibition Road, London: A decade on 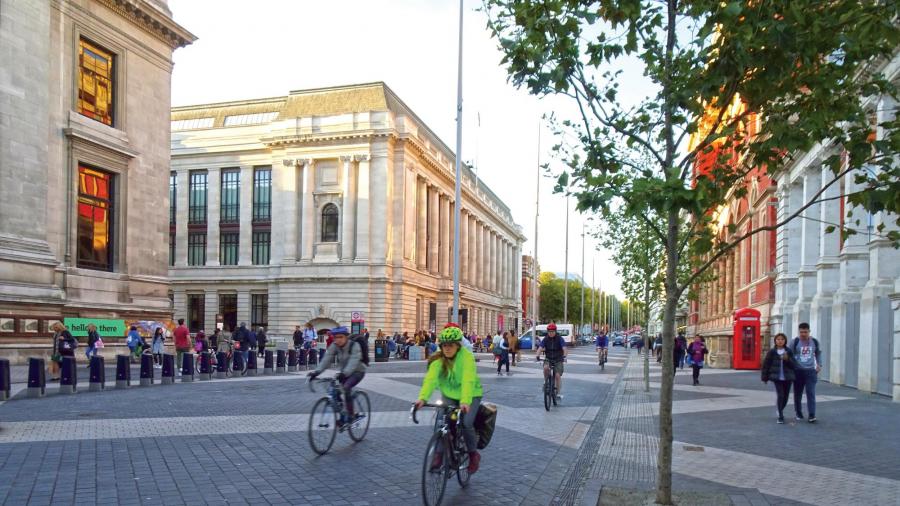 A vast public space: Exhibition Road feels like a vast and truly public space. This is partly due to its generous width from building line to building line (30m on average), and the sense of continuity between the various cultural institutions situated along its length (approximately 720m). The road is well used as a pedestrian promenade and cycle route while passing vehicles have to negotiate a more complicated street environment.

Edges: The public realm scheme at Exhibition Road has been integrated with other schemes, usually seamlessly, but at times more abruptly. The visual continuity of the diagonal paving pattern is inconsistent with adjacent sites but this is partly because this design is newer than much of its surroundings. Large portions of the road are framed by buildings with blank façades which at times have a negative impact on the vibrancy of the street.

Security retrofit: Granite bollards have appeared in key locations, such as the intersection with Cromwell Gardens to provide a physical barrier, protecting crowded pedestrian areas around the museums from the threat of terrorism.

Clutter free: The stealthy re-colonisation of Exhibition Road by street furniture has generally been avoided. There are very few examples where elements such as bins interfere with the flow of movement and, interestingly, private electric bicycle parking has intuitively followed the arrangement set out by fixed cycle docking stations.

Ownership of spaces: Many cafés lay out tables and chairs along the southern end of Exhibition Road. Cumulatively, these provide a street environment with a much more continental feel, particularly in fair weather.

Level and material changes: The cracking or dislodging of street paving has generally occurred where there are level changes or the surface transitions from one material to another. By contrast, the central section of the road has proved to be resilient with far less wear and tear.

Maintenance: The repair of surface materials has not always been to the standard of the original palette, as asphalt replaces street paving in some locations. Several instances of dislodged vertical bollards suggest that drivers do not have a clear sense of the delineation of parking spaces.

Reflection: Exhibition Road continues to be an innovative and successful public space that relies on the considerate interaction between its various users. The absence of signal-controlled crossings presents risks to partially sighted or blind individuals. Nevertheless, tangible efforts have been made to mitigate these risks through the provision of braille signage and maps.

Ten years after it began, how is this most famous and controversial shared space standing the test of time?