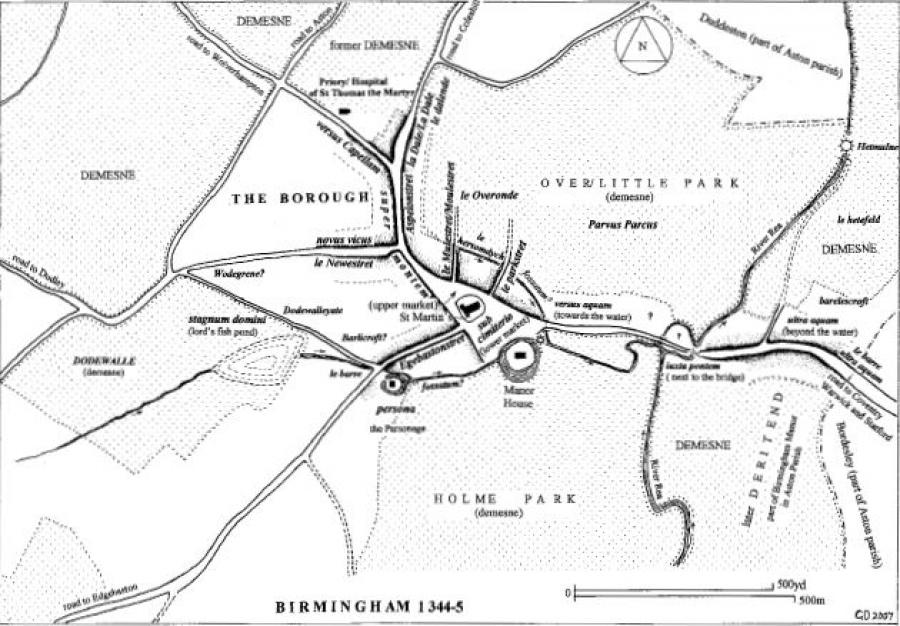 George is a historian, author and archaeologist, and a friend. He used to lead Coventry City Council’s conservation and archaeology team, but he has done a lot of work on Birmingham’s mediaeval history, and also on Matthew Boulton’s and James Watt’s industrial enterprises. This plan, and a similar one of 1296, are based upon George’s chance discovery in Longleat House of two rental rolls belonging to the lord of the manor of Birmingham. From these rentals, he was able to reconstruct the topography and street pattern of the town, establish the distribution of wealth through landholdings, name the leading citizens, and identify the occupations, crafts and industries which they pursued.

It is enjoyable to trace those features and names which have survived and are recognisable, nearly seven centuries on from 1344. The most striking is the triangular hillside upper market place, closed at its lower end by the parish church of St Martin. This space persisted, under its later mediaeval name of the Bull Ring, until Herbert Manzoni’s Inner Ring Road crashed through it in 1960. The citizens’ group Birmingham for People sought to reinstate the space in our 1989 counterplan to the proposed redevelopment of the 1964 indoor Bull Ring Shopping Centre. We half-succeeded.

The river Rea continues to flow north, although its course has been altered over time by the engineering of mill-races serving several watermills. One of them, Hetmulne (Heath Mill) is shown, and has since given its name to the anonymous lane to the right of the map. Le Moulestret still exists, with its name corrupted to Moor Street, and with an Edwardian railway station of the same name. George’s research reveals that the street was named after the town’s richest citizen Roger le Moul, who rented thirteen burgages, eight half-burgages, and six tenements.

Le parkstret is still there. It was so named as it led to the lord of the manor’s deer park, now long ago buried under the industrial development of Digbeth. But it is a nice coincidence that Park Street today connects the Bull Ring to the 2013 Eastside Park designed by Patel Taylor and Allan Provost, located about where George has placed his north point (although HS2 will sever this connection).

George’s purpose in drawing the plan was to give tangible form to an otherwise invisible 14th century town. But by recording the past, plans also provide information which can give clues about how we should build in the future. Urban designers rarely if ever start from zero; we add to and amend what is already there, and I am a firm believer that recorded history can suggest appropriate ways in which to do it. Plans like George’s, interpreted with intelligence, discrimination and imagination, can help us to establish a beneficial continuity between the past and the future. 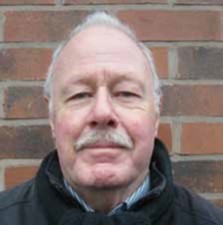 Ambitions
To at least finish the big job I am now working on before I have to retire.